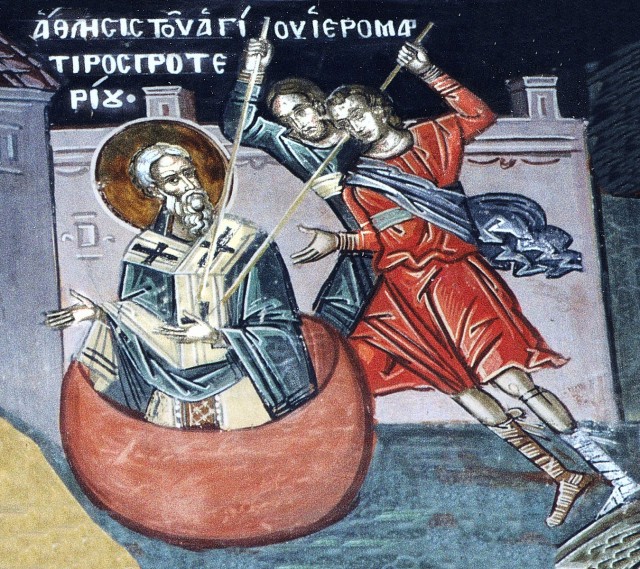 The Hieromartyr Proterius, Patriarch of Alexandria, and those with him. The priest Proterius lived in Alexandria during the patriarchal tenure of Dioscorus (444-451), an adherent of the Monophysite heresy of Eutyches. Proterius fearlessly denounced the heretics and confessed the Orthodox Faith.

In 451 at the Fourth Ecumenical Council of Chalcedon, the heresy of Eutyches was condemned and the teaching of Christ as Perfect God and Perfect Man, existing in these two natures "unconfusedly" and "indivisibly" [and "immutably" and "inseparably"] was set forth. The heretic Dioscorus was deposed and exiled, and Proterius, distinguished for his strict and virtuous life, was placed upon the patriarchal throne of Alexandria.

However, many supporters of Dioscorus remained in Alexandria. Rebelling against the election of Proterius, they rioted and burned the soldiers who were sent out to pacify them. The pious emperor Marcian (450-457) deprived the Alexandrians of all the privileges they were accustomed to, and sent new and reinforced detachments of soldiers. The inhabitants of the city then quieted down and begged Patriarch Proterius to intercede with the emperor to restore their former privileges to them. The kindly saint consented and readily obtained their request.

After the death of Marcian the heretics again raised their heads. Presbyter Menignus ("the Cat"), himself striving for the patriarchal dignity, and taking advantage of the absence of the prefect of the city, was at the head of the rioters. St Proterius decided to leave Alexandria, but that night he saw in a dream the holy Prophet Isaiah, who said to him, "Return to the city, I am waiting to take you." The saint realized that this was a prediction of his martyric end. He returned to Alexandria and concealed himself in a baptistry.

The insolent heretics broke into this refuge and killed the Patriarch and six men who were with him. The fact that it was Holy Saturday and the Canon of Pascha was being sung did not stop them. In their insane hatred they tied a rope to the body of the murdered Patriarch, and dragged it through the streets. They beat and lacerated it, and finally they burned it, scattering the ashes to the wind.

The Orthodox reported this to the holy Emperor Leo (457-474) and St Anatolius, Patriarch of Constantinople (July 3). An army arrived at Alexandria, the rebellion was crushed, and Menignus was brought to trial and exiled.

Regarding the death of the Hieromartyr Proterius, four Thracian bishops of his time wrote: "We consider His Holiness Proterius to be in the ranks and choir of the saints, and we beseech God to be compassionate and merciful to us through his prayers."