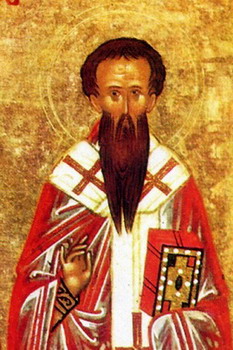 Saint Basil the Confessor was a monk and suffered during the reign of the iconoclast emperor Leo the Isaurian (717-741). When a persecution started against those who venerated holy icons, St Basil and his companion St Procopius of Decapolis (February 27) were subjected to much torture and locked up in prison. Here both martyrs languished for a long while, until the death of the impious emperor.

When the holy Confessors Basil and Procopius were set free along with other venerators of holy icons, they continued in their monastic struggles, instructing many in the Orthodox Faith and the virtuous life. St Basil died peacefully in the year 750.

Dweller of the desert and angel in the body,
you were shown to be a wonder-worker, our God-bearing Father Basil.
You received heavenly gifts through fasting, vigil, and prayer:
healing the sick and the souls of those drawn to you by faith.
Glory to Him who gave you strength!
Glory to Him who who grant granted you a crown!
Glory to Him who through you grants healing to all!

Podoben: "Seeking the highest..."
You received a revelation of God from on high, O wise one,
and withdrew from the midst of the world's tumult.
You lived the monastic life with honor,
receiving the power to work miracles and heal diseases by grace,
most blessed and holy Basil.