Our Holy Father Titus of the Kiev Caves 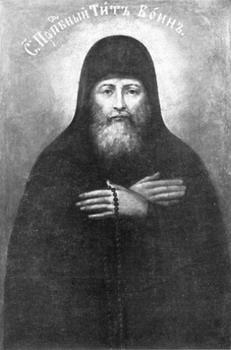 Saint Titus, Presbyter of the Near Caves, lived in great friendship with the deacon Evagrius, which later turned into a strong dislike and hostility. Although Hieromonk Titus tried several times to make peace with his former friend, the deacon Evagrius refused to be reconciled (Compare the story of the Martyr Nicephorus on February 9).

When St Titus fell ill with a grievous illness and began to prepare himself for death, he asked for Evagrius to be brought to him in order to ask his forgiveness. The brethren brought Evagrius to the sickbed by force. St Titus tearfully begged him for forgiveness, but Evagrius remained obstinate. He declared that he would not forgive Titus in this world, nor in the world to come. As he said this, he fell dead, struck down by an angel. At that very instant, St Titus was healed, and got up out of bed. He revealed that the demons were all around him until he forgave Evagrius. When he had done so, the demons left him and attacked Evagrius, while radiant angels surrounded St Titus.

After this, St Titus increased his ascetic struggles, and received from God the gift of working miracles. He was also known for his great humility.

St Titus reposed around 1190. His memory is celebrated also on September 28 at the Synaxis of the Fathers of the Near Caves.