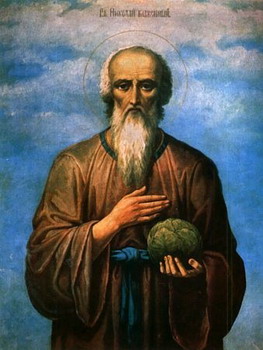 Blessed Theodore of Novgorod was the son of pious parents, wealthy citizens of Novgorod. Having been raised in strict Christian piety, and having reached the age of maturity, he took on himself the ascetic deed of foolishness for Christ's sake. He gave all his possessions to the poor, and he lived in great poverty until the end of his life, not even having a roof over his head, nor warm clothes on cold days.

When he discovered a mutual enmity between the Novgorod citizens of the Torgov quarter and the inhabitants of the Sophia quarter, Blessed Theodore pretended to be feuding with Blessed Nicholas Kochanov (July 27) who lived in asceticism on the opposite Sophia side. When Blessed Theodore happened to cross over the Volkhov Bridge to the Sophia side, then Blessed Nicholas pushed him over to the Torgov side. Theodore did the same thing when Nicholas chanced upon on the Torgov side. The blessed ones, spiritually in agreement with each other, by their unusual behavior reminded the people of Novgorod of their own internecine strife, which often ended in bloody skirmishes.

The blessed one possessed the gift of clairvoyance. By warning people to see to their bread, he was actually predicting an impending famine. Another time he said, "This will be bare, it will be fine for sowing turnips." This was his prediction of a fire that devastated the streets of the Torgov quarter. Blessed Theodore foresaw his own end and said to the Novgorod people, "Farewell, I'm going far away."

During his life, the citizens of Novgorod saw him as a saint pleasing to God, and had a high regard for him. After his death in the year 1392, the holy fool was buried, at his request, in the Torgov quarter, at Lubyanitsa in the church of the holy Great Martyr George, at the porch where the saint usually loved to spend his time in unceasing prayer. A chapel was built over his holy relics.