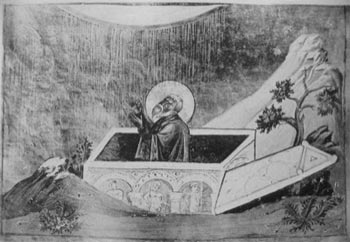 Saint James the Faster lived a life of asceticism near the Phoenician city of Porphyrion in the sixth century. For fifteen years, he lived in a cave devoting himself to monastic deeds, and he received the gift of wonderworking from the Lord. Under his influence many of the local inhabitants were converted to the Christian Faith.

News of the ascetic spread everywhere, and so went to another place so that he would not fall into temptation. He found a new cave, and lived there for thirty years. The devil set terrible snares for the ascetic. James healed a young girl from demonic possession, but then fell into sin with her. In order to conceal his sin, he killed the girl and threw her into a river.

Distraught over this sin, he repented for what he had done. For a long time he hid himself away in the wilderness, bereft of shelter and peace, tormented by the pricks of conscience, and he was on the point of forsaking the monastic life and returning to the world. But the immeasurable mercy of God, against which the sins of this world cannot prevail, and which desires salvation for all mankind, would not permit the ruin of this monk who had toiled so many years for the Lord.

The Lord thwarted the devil's intent to destroy the ascetic, and returned him through repentance to the path of salvation. Wandering about the wilderness, James saw a monastery, and entering it, he confessed his sin before the igumen and the brethren. The igumen urged him to remain with them, fearing that he would ultimately fall into despair. But James went off and again he wandered the wilderness for a long time.

Finally the All-Beneficent Providence of God brought him to a certain desert-dweller filled with grace and wisdom. Lifting the burden from him, the desert-dweller suggested that James remain with him. But James would not remain with the Elder, though encouraged and given hope by him, and he secluded himself in a cave and there for ten years offered repentance to God, weeping and wailing, and asking forgiveness for the sin he committed. The Lord heard the prayers of the penitent monk and granted him His mercy. James reacquired his gift of wonderworking. He remained in the cave until the time of his death. He was also buried there. 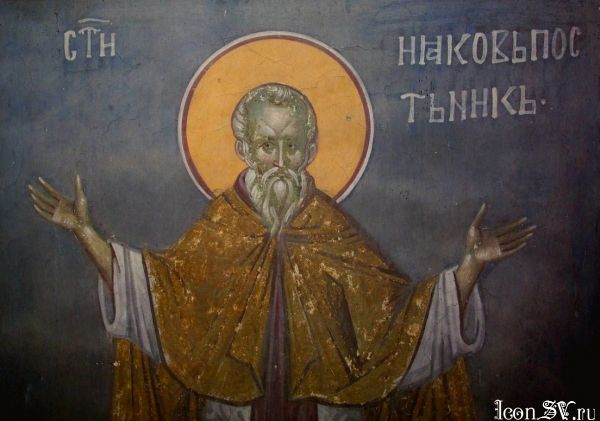