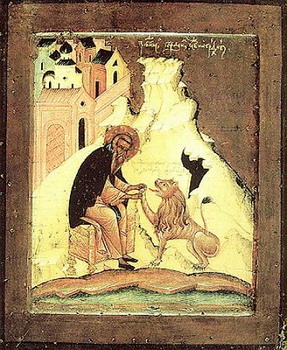 Saint Gerasimus was a native of Lycia (Asia Minor). From his early years he was distinguished for his piety. Having received monastic tonsure, he withdrew into the desert of the Thebaid (in Egypt). Thereafter, in about the year 450, the monk arrived in Palestine and settled at the Jordan, where he founded a monastery.

For a certain while St Gerasimus was tempted by the heresy of Eutyches and Dioscorus, which acknowledged only the divine nature in Jesus Christ, but not His human nature (i.e. the Monophysite heresy). St Euthymius the Great (January 20) helped him to return to the true Faith.

St Gerasimus established a strict monastic Rule. He spent five days of the week in solitude, occupying himself with handicrafts and prayer. On these days the wilderness dwellers did not eat cooked food, nor did they kindle a fire, but ate only dry bread, roots and water.

On Saturday and Sunday all gathered at the monastery for Divine Liturgy and to partake of the Holy Mysteries of Christ. In the afternoon, taking a supply of bread, tubers, water and an armload of date-palm branches for weaving baskets, the desert-dwellers returned to their own cells. Each had only old clothes and a mat, upon which he slept. When they left their cells, the door was never locked, so that anyone could enter and rest, or take whatever he needed.

St Gerasimus himself attained a high level of asceticism. During Great Lent he ate nothing until the very day of the All-Radiant Resurrection of Christ, when he received the Holy Mysteries. Going out into the desert for all of Great Lent, St Gerasimus took with him his beloved disciple St Cyriacus (September 29), whom St Euthymius had sent to him.

When St Euthymius the Great died, St Gerasimus saw how angels carried the soul of the departed up to Heaven. Taking Cyriacus with him, the monk immediately set off to the monastery of St Euthymius and consigned his body to the earth.

St Gerasimus died peacefully, mourned by his brethren and disciples. Before his death, a lion had aided St Gerasimus in his tasks, and upon the death of the Elder it died at his grave and was buried nearby. Therefore the lion is depicted on icons of the saint, at his feet.

Dweller of the desert and angel in the body,
you were shown to be a wonderworker, our God-bearing Father Gerasimus.
You received heavenly gifts through fasting, vigil, and prayer:
healing the sick and the souls of those drawn to you by faith.
Glory to Him who gave you strength!
Glory to Him who granted you a crown!
Glory to Him who through you grants healing to all!

Father, you burned with heavenly love,
preferring the harshness of the Jordan desert to all the delights of the world.
Therefore, a wild beast served you until your death; he died in obedience
and grief on your grave.
Thus God has glorified you,
and when you pray to Him
remember us, Father Gerasimus. 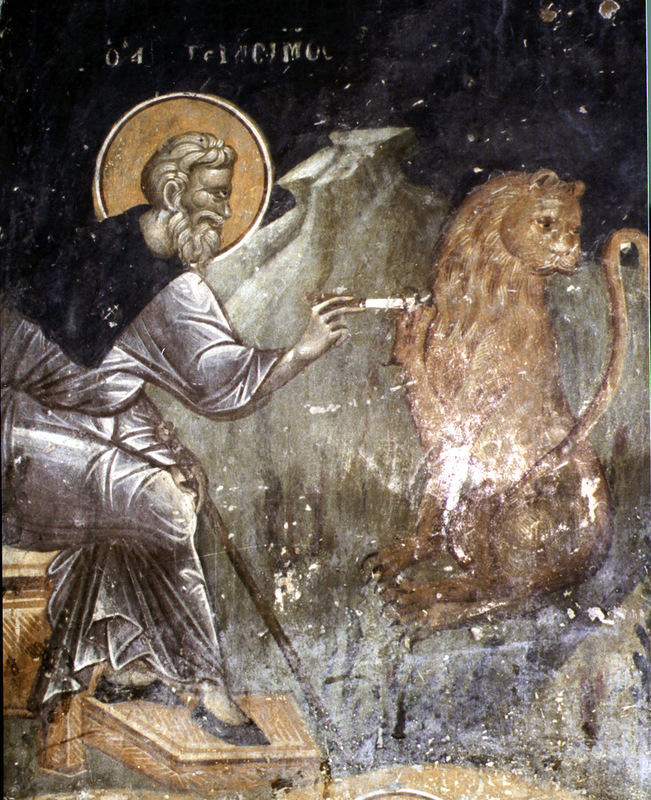 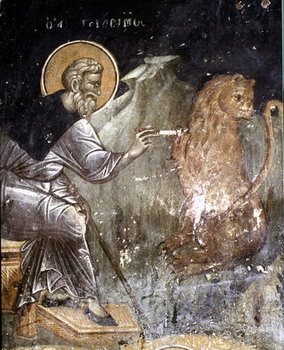