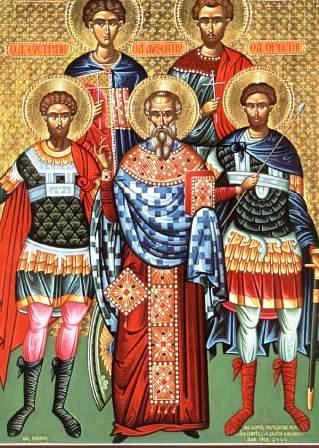 The Holy Martyrs Eustratius, Auxentius, Eugene, Mardarius, and Orestes (the Five Companions) suffered for Christ under the emperor Diocletian (284-305) at Sebaste, in Armenia.

Among the first Christians imprisoned and undergoing torture at that time was St Auxentius, a presbyter of the Arabian Church. One of those who witnessed the steadfastness of the Christians was the noble military commander St Eustratius, the city prefect of Satalios, and archivist of the province. He was secretly a Christian, and when he openly confessed his faith, he was subjected to torture. They beat him, and put iron sandals studded with sharp nails on his feet, then forced him to march to the city of Arabrak.

Witnessing the arrival of St Eustratius in Arabrak, one of the common people, St Mardarius, confessed that he was also a Christian like St Eustratius. He was arrested and cast into prison. Holes were drilled in his ankles, and ropes were passed them. He was suspended upside down, then heated nails were hammered into his body. He died a short time later. To him is attributed the prayer "O Master Lord God, Father Almighty ..." (which is read at the end of the Third Hour).

As for St Eugene, they ripped out his tongue, they cut off his hands and feet, and then they beheaded him with a sword. St Auxentius was also arrested and beheaded. The young soldier St Orestes confessed himself a Christian and stood trial for this "crime." He was sentenced to be stretched out upon a red-hot iron bed, and became frightened when he approached it. Encouraged by St Eustratius, he made the Sign of the Cross and got onto the heated bed, where he surrendered his soul to God.

St Eustratius was sentenced to be burned alive on December 13. As he was being led to his death, he prayed aloud ("I magnify Thee exceedingly, O Lord, for Thou hast regarded my lowliness..."). This prayer is still read at the Saturday Midnight Office. 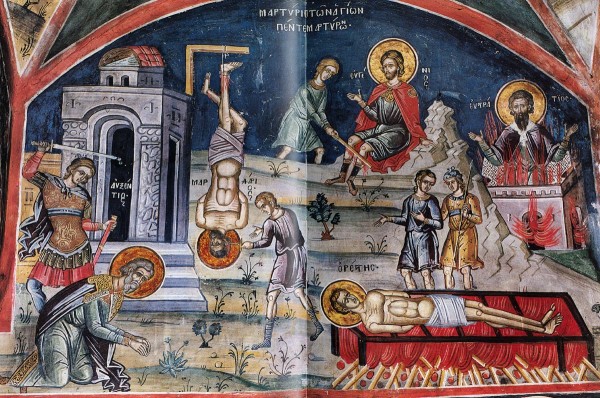 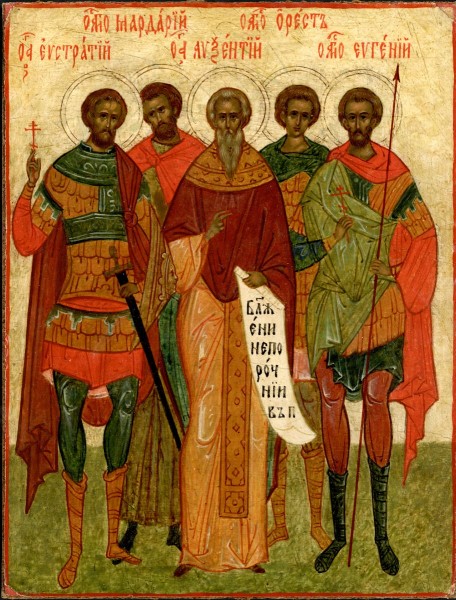