Our Holy Father Paul of Latros 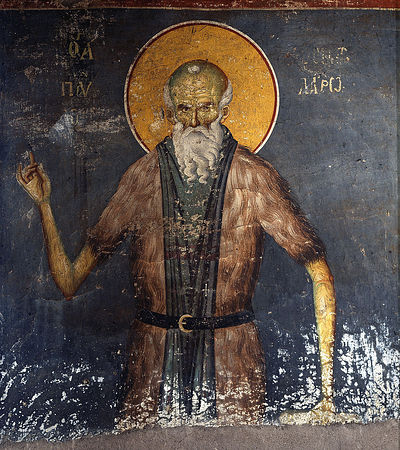 Saint Paul of Latros was a native of the city of Aelen in Pergamum. Early bereft of his father, he was educated at the monastery of St Stephen in Phrygia. After the death of his mother, he devoted himself completely to monastic deeds at a monastery on Mount Latra, near Miletos.

Seeking even loftier accomplishments, he secluded himself in a cave. For his ascetic deeds he gained the gifts of clairvoyance and wonderworking. The emperor Constantine VII Porphyrogenitos (912-959) often wrote to him, asking his prayers and counsel. St Paul twice withdrew to the island of Samos, where he established a monastery and restored three monasteries ravaged by the Hagarenes (Arabs). Foretelling his end, the monk reposed in the year 955.

Since you dwell together with the bodiless hosts
and are a companion of all the venerable ones,
we praise you, most glorious Paul,
and we beseech you:
"Always pray for us, so that we may find mercy!"

From your youth, O wise one, you bravely desired that which passes understanding
and you forsook the tumult of the world.
Because of your divine way of life you became a dwelling of the Trinity
and enlighten those who turn to you with faith!
Therefore we cry out to you: "Rejoice, most wealthy Paul!"