The Hieromartyr Gavrilo, Patriarch of Serbia 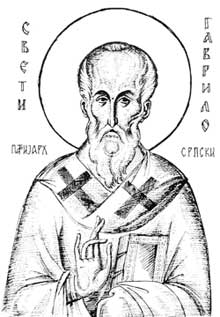 In the fearful period of Turkish rule in Serbia, this great hierarch went to Russia, where he took part in the Moscow Synod of 1655. When he returned to Serbia, he was denounced as a traitor. Certain wicked Jews also brought against him the charge of having converted several Jews to the Christian faith. These Jews, in order to stir up the Turkish authorities, made a special point of the fact that he had worked for the baptism of Turks. He was tried, and sentenced to forcible conversion to Islam. Since Gavrilo would have none of this, he was, after a period of imprisonment, sentenced to death and hanged in Brussa in 1659, and so went to his beloved Christ, to receive at His hands the double wreath of hierarch and martyr.