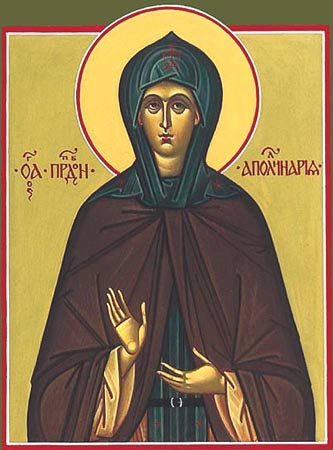 Saint Apollinaria was a daughter of Anthemias, a former proconsul of the Byzantine Empire during the minority of Theodosius the Younger (408-450). Disdaining marriage, she requested her parents' permission to make a pilgrimage to the holy places of the East. Arriving in Alexandria from Jerusalem, she slipped away from her servants and changed into monastic garb. She hid in a marsh, where she practised asceticism for several years in strict fasting and prayer.

An angel appeared to her in a dream and told her to go to the monastery of Sketis, which was under the spiritual direction of St Macarius of Egypt (January 19), and to call herself Dorotheus. St Macarius accepted her as one of the brethren, and she quickly distinguished herself by her ascetical life.

St Apollinaria's parents had another daughter who was possessed by demons. They sent her to Sketis to St Macarius, who brought the afflicted girl to Dorotheus (Apollinaria). By her prayers, the maiden received healing. After she returned home, the maiden was attacked by a violent demon, who made her appear pregnant. The demon spoke through the girl's lips, saying that Dorotheus had forced himself on her. Her outraged parents sent soldiers to the monastery to find the one who had defiled their daughter.

St Apollinaria took the blame and accompanied the envoys to the home of her parents. There she revealed her secret to her parents, healed her sister, and returned to Sketis. She died shortly thereafter in the year 470. Only after the death of Dorotheus was it revealed that "he" was actually a woman. The saint was buried in a cave in the monastery church of St Macarius of Egypt.

Your lamb Apollinaria,
calls out to You, O Jesus, in a loud voice:
"I love You, my Bridegroom,
and in seeking You, I endure suffering.
In baptism I was crucified so that I might reign in You, and I died so that I might live with You.
Accept me as a pure sacrifice,
for I have offered myself in love."
Through her prayers save our souls, since You are merciful.

Having found your holy relics as healing for our souls, We faithful call out to you with a loud voice:
"O reknowned Virgin Martyr Apollinaria,
Intercede to Christ God for us all!"