The Hieromartyr Theopemptus and the Holy Martyr Theonas 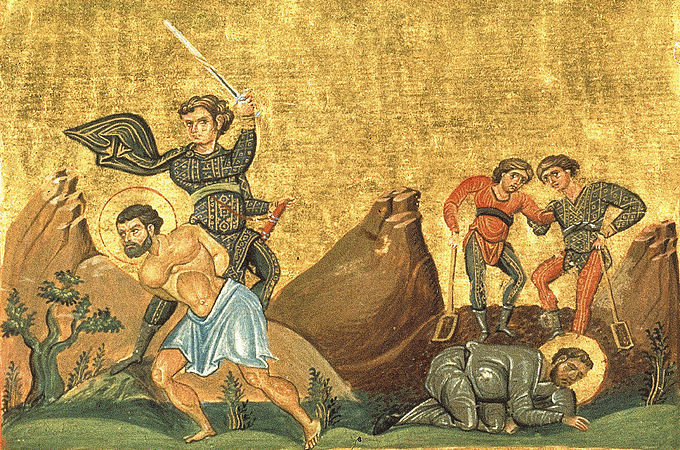 The saint refused to obey the emperor's order to worship an idol of Apollo. St Theopemptus was thrown into a red-hot furnace, but by the power of God he remained alive. The emperor came to the furnace by night with a detachment of soldiers, and there he saw the saint alive and praying to God. Ascribing the miracle to magic, Diocletian thought to exhaust St Theopemptus by depriving him of food and drink for twenty-two days, but the martyr was preserved by the will of God.

The emperor brought the famous sorcerer Theonas to overcome Bishop Theopemptus' supposed magical power. Theonas prepared a poison for St Theopemptus, put it into a little cake, and offered it to him to eat. The poison did no harm at all to St Theopemptus. Then Theonas tried an even stronger poison on the martyr. Seeing that St Theopemptus remained unharmed, he came to believe in Christ. They threw him into prison together with the holy bishop, who taught and baptized him, giving him the name Synesios (which means "full of understanding").

At dawn Diocletian summoned St Theopemptus, and again tried to turn him to pagan impiety. Seeing that the bishop remained firm in his faith, he subjected him to many grievous tortures, after which the saint was beheaded. The holy martyr Theonas refused to offer sacrifice to idols, so he was buried alive in a deep ditch. This occurred at Nicomedia in the year 303.

Your holy martyr Theopemptus, O Lord,
Through his sufferings has received an incorruptible crown from You, our God.
For having Your strength, he laid low his adversaries,
And shattered the powerless boldness of demons.
Through his intercessions, save our souls!