The Assembly of the Seventy Apostles 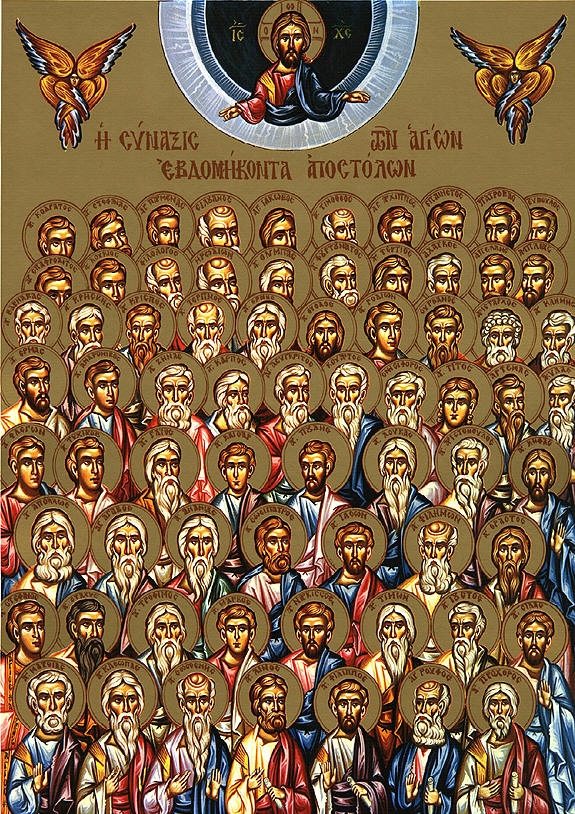 The Synaxis of the Seventy Apostles was established by the Orthodox Church to indicate the equal honor of each of the Seventy. They were sent two by two by the Lord Jesus Christ to go before Him into the cities He would visit (Luke 10:1).

Besides the celebration of the Synaxis of the Holy Disciples, the Church celebrates the memory of each of them during the course of the year:

With the Descent of the Holy Spirit the Seventy Apostles preached in various lands. Some accompanied the Twelve Apostles, like the holy Evangelists Mark and Luke, or St Paul's companion Timothy, or Prochorus,the disciple of the holy Evangelist John the Theologian, and others. Many of them were thrown into prison for Christ, and many received the crown of martyrdom.

There are two more Apostles of the Seventy: St Cephas, to whom the Lord appeared after the Resurrection (1 Cor. 15:5-6), and Simeon, called Niger (Acts 13:1). They also were glorified by apostolic preaching.

There are discrepancies and errors in some lists of the Seventy Apostles. In a list attributed to St Dorotheus of Tyre (June 5) some names are repeated (Rodion, or Herodion, Apollos, Tychicus, Aristarchus), while others are omitted (Timothy, Titus, Epaphras, Archippus, Aquila, Olympas). St Demetrius of Rostov consulted the Holy Scripture, the traditions passed down by the Fathers, and the accounts of trustworthy historians when he attempted to correct the mistakes and uncertainties in the list in compiling his collection of Lives of the Saints.

The Church in particular venerates and praises the Seventy Apostles because they taught us to honor the Trinity One in Essence and Undivided.

In the ninth century St Joseph the Hymnographer composed the Canon for the Synaxis of the Seventy Apostles of Christ.

Holy apostles of the Seventy,
entreat the merciful God
to grant our souls forgiveness of transgressions.

O faithful, let us praise with hymns
the choir of the seventy disciples of Christ.
They have taught us all to worship the undivided Trinity,
for they are divine lamps of the Faith. 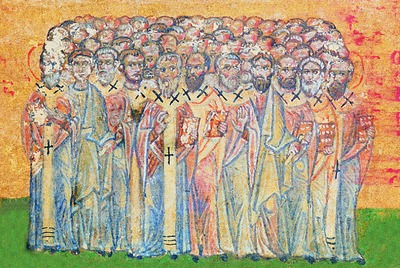