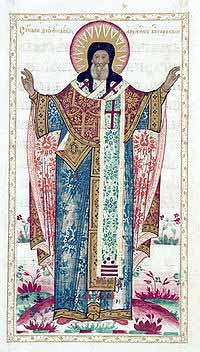 Born on the island of Euboea, and educated in Constantinople by the most eminent teachers of his day, he became a priest in the Great Church. He was chosen as bishop, and sent, against his will, to Ochrid, where he spent about twenty-five years (from about 1082 to 1108). Chomatianus of Ochrid calls him "the wisest archbishop". He was a man of enormous learning, both secular and theological, of refined Byzantine tastes, and was by nature melancholy and sensitive. "Meophylact felt himself among the Slavs of Ochrid like an exile among barbarians. He wrote commentaries an the Four Gospels and on other books of the New Testament. These are the finest works of their sort after St John Chrysostom, and ate read to this day with great benefit. Of his other works, we know of his Letters, and a Life of St Clenet of Ochrid. In old age, Theophylact withdrew from Ochrid to Salonica, and finishing his earthly course, went to the blessedness of eternity.