Our Holy Father, the Martyr Zoticus, Protector of the Poor 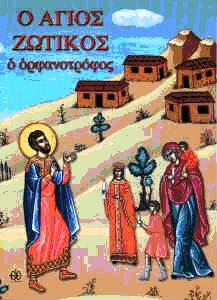 He was eminent both of birth and rank. He moved to Constantinople, cast off all worldly things and received ordination to the priesthood, founding a home for the poor, containing a place for the treatment of infectious diseases, and ministering to those cared for in it. He was a close acquaintance of the Emperor Constantine the Great. In retaliation for the gold that Zoticus had had from him for his plague-victims, Constantine"s son Constantius tied him behind a wild ass, which was driven about until he died of his wounds. He suffered in the fourth century.