The Holy Martyr Sebastian and those with him 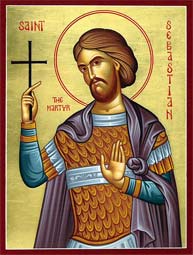 The Holy Martyr Sebastian was born in the city of Narbonum in Gaul (modern France), and he received his education at Mediolanum (now Milan). Under the co-reigning emperors Diocletian and Maximian (284-305) he occupied the position of head of the imperial guards. St Sebastian was respected for his authority, and was loved by the soldiers and those at court. He was a brave man filled with wisdom, his word was honest, his judgment just, insightful in advice, faithful in his service and in everything entrusted to him. He was a secret Christian, not out of fear, but so that he could provide help to the brethren in a time of persecution.

The noble Christian brothers Marcellinus and Mark had been locked up in prison, and at first they firmly confessed the true Faith. But under the influence of the tearful entreaties of their pagan parents (Tranquillinus and Marcia), and also their own wives and children, they began to waver in their intent to suffer for Christ. St Sebastian went to the imperial treasurer, at whose house Marcellinus and Mark were held in confinement, and addressed the brothers who were on the verge of yielding to the entreaties of their family.

"O valiant warriors of Christ! Do not cast away your everlasting crowns of victory because of the tears of your relatives. Do not remove your feet from the necks of your enemies who lie prostrate before you, lest they regain their strength and attack you more fiercely than before. Raise your banner high over every earthly attachment. If those whom you see weeping knew that there is another life where there is neither sickness nor death, where there is unceasing gladness and everything is beautiful, then assuredly they would wish to enter it with you. Anyone who fears to exchange this brief earthly life for the unending joys of the heavenly Kingdom is foolish indeed. For he who rejects eternity wastes the brief time of his existence, and will be delivered to everlasting torment in Hades."

Then St Sebastian said that if necessary, he would be willing to endure torment and death in order to show them how to give their lives for Christ.

So St Sebastian persuaded the brothers to go through with their act of martyrdom, and his speech stirred everyone present. They saw how his face shone like that of an angel, and they saw how seven angels clothed him in a radiant garment, and heard a fair Youth say, "You shall be with Me always."

Zoe, the wife of the jailer Nicostratus, had lost her ability to speak six years previously, and she fell down at the feet of St Sebastian, by her gestures imploring him to heal her. The saint made the Sign of the Cross over the woman, and she immediately began to speak and she glorified the Lord Jesus Christ. She said that she had seen an angel holding an open book in which everything St Sebastian said was written. Then all who saw the miracle also came to believe in the Savior of the world. Nicostratus removed the chains from Marcellinus and Mark and offered to hide them, but the brothers refused.

Mark said, "Let them tear the flesh from our bodies with cruel torments. They can kill the body, but they cannot conquer the soul which contends for the Faith." Nicostratus and his wife asked for Baptism, and St Sebastian advised Nicostratus to serve Christ rather than the Eparch. He also told him to assemble the prisoners so that those who believed in Christ could be baptized. Nicostratus then requested his clerk Claudius to send all the prisoners to his house. Sebastian spoke to them of Christ, and became convinced that they were all inclined to be baptized. He summoned the priest Polycarp, who prepared them for the Mystery, instructing them to fast in preparation for Baptism that evening.

Then Claudius informed Nicostratus that the Roman eparch Arestius Chromatus wanted to know why the prisoners were gathered at his house. Nicostratus told Claudius about the healing of his wife, and Claudius brought his own sick sons, Symphorian and Felix to St Sebastian. In the evening the priest Polycarp baptized Tranquillinus with his relatives and friends, and Nicostratus and all his family, Claudius and his sons, and also sixteen condemned prisoners. The newly-baptized numbered 64 in all.

Appearing before the eparch Chromatus, Nicostratus told him how St Sebastian had converted them to Christianity and healed many from sickness. The words of Nicostratus persuaded the eparch. He summoned St Sebastian and the presbyter Polycarp, and was enlightened by them, and became a believer in Christ. Nicostratus and Chromatus, his son Tiburtius and all his household accepted holy Baptism. The number of the newly-enlightened increased to 1400. Upon becoming a Christian, Chromatus resigned his office of eparch.

During this time the Bishop of Rome was St Gaius (August 11). He blessed Chromatus to go to his estates in southern Italy with the priest Polycarp. Christians unable to endure martyrdom also went with them. Father Polycarp went to strengthen the newly-converted in the Faith.

Tiburtius, the son of Chromatus, desired to accept martyrdom and he remained in Rome with St Sebastian. Of those remaining, St Gaius ordained Tranquillinus as a presbyter, and his sons Marcellinus and Mark were ordained deacons. Nicostratus, his wife Zoe and brother Castorius, and Claudius, his son Symphorian and brother Victorinus also remained in Rome. They gathered for divine services at the court of the emperor together with a secret Christian named Castulus, but soon the time came for them to suffer for the Faith.

The pagans arrested St Zoe first, praying at the grave of the Apostle Peter. At the trial she bravely confessed her faith in Christ. She died, hung by her hair over the foul smoke from a great fire of dung. Her body then was thrown into the River Tiber. Appearing in a vision to St Sebastian, she told him about her death.

The priest Tranquillinus was the next to suffer: pagans pelted him with stones at the grave of the holy Apostle Peter, and his body was also thrown into the Tiber.

Sts Nicostratus, Castorius, Claudius, Victorinus ,and Symphorian were seized at the riverbank, when they were searching for the bodies of the martyrs. They were led to the eparch, and the saints refused his command to offer sacrifice to idols. They tied stones to the necks of the martyrs and then drowned them in the sea.

The false Christian Torquatus betrayed St Tiburtius. When the saint refused to sacrifice to the idols, the judge ordered Tiburtius to walk barefoot on red-hot coals, but the Lord preserved him. Tiburtius walked through the burning coals without feeling the heat. The torturers then beheaded St Tiburtius, and his body was buried by unknown Christians.

Torquatus also betrayed the holy Deacons Marcellinus and Mark, and St Castulus (March 26). After torture, they threw Castulus into a pit and buried him alive, but Marcellinus and Mark had their feet nailed to the same tree stump. They stood all night in prayer, and in the morning they were stabbed with spears.

St Sebastian was the last one to be tortured. The emperor Diocletian personally interrogated him, and seeing the determination of the holy martyr, he ordered him taken out of the city, tied to a tree and shot with arrows. Irene, the wife of St Castulus, went at night in order to bury St Sebastian, but found him alive and took him to her home.

St Sebastian soon recovered from his wounds. Christians urged him to leave Rome, but he refused. Coming near a pagan temple, the saint saw the emperors approaching and he publicly denounced them for their impiety. Diocletian ordered the holy martyr to be taken to the Circus Maximus to be executed. They clubbed St Sebastian to death, and cast his body into the sewer. The holy martyr appeared to a pious woman named Lucina in a vision, and told her to take his body and bury it in the catacombs. This she did with the help of her slaves. Today his basilica stands on the site of his tomb.

Your holy martyrs, O Lord,
through their suffering have received incorruptible crowns from You, our God.
For having Your strength, they laid low their adversaries,
and shattered the powerless boldness of demons.
Through their intercessions save our souls!

Excelling in godly zeal,
you gathered a band of martyrs from which you shone as a star.
The arrows that wounded your body, O Sebastian,
pierced the hearts of the enemy.
Therefore Christ has glorified you! 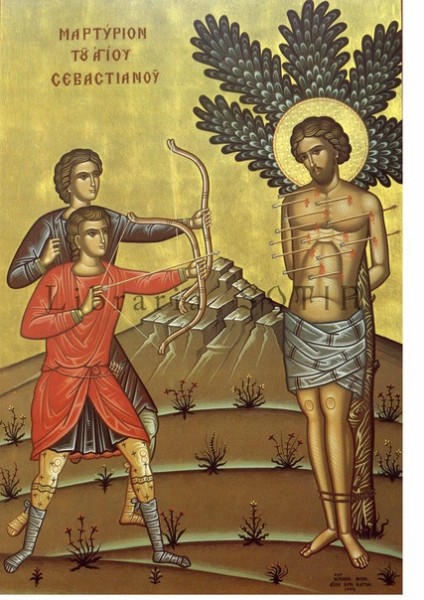 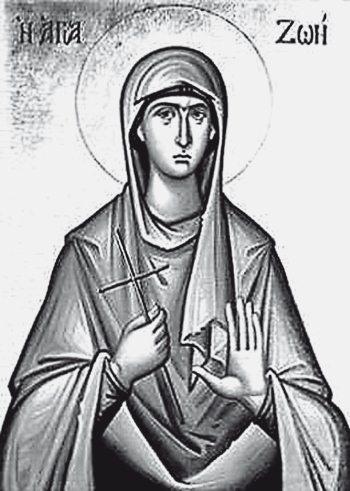