The Holy and Great Martyr Anastasia the Deliverer from Bonds, and those with her 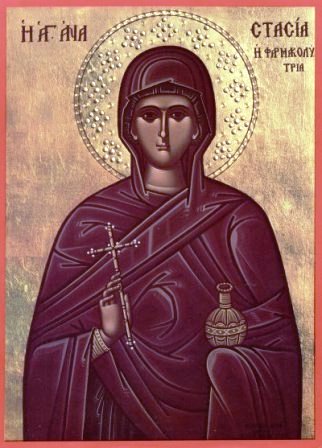 The Great Martyr Anastasia the Deliverer from Potions, a Roman by birth, suffered for Christ at the time of Diocletian's persecution of Christians. Her father was a pagan, but her mother was secretly a Christian. St Anastasia's teacher in her youth was an educated and pious Christian named Chrysogonus. After the death of her mother, her father gave St Anastasia in marriage to a pagan named Publius, but feigning illness, she preserved her virginity.

Clothing herself in the garb of a beggar, and accompanied by only one servant, she visited the prisons. She fed, doctored and often ransomed captives who were suffering for their faith in Christ. When her servant told Publius about everything, he subjected his wife to a beating and locked her up at home. St Anastasia then began to correspond secretly with Chrysogonus, who told the saint to be patient, to cleave to the Cross of Christ, and to accept the Lord's will. He also foretold the impending death of Publius in the sea. After a certain while Publius did indeed drown, as he was setting out with a delegation to Persia. After the death of her husband, St Anastasia began to distribute her property to the poor and suffering.

Diocletian was informed that the Christians who filled the prisons of Rome stoically endured tortures. He gave orders to kill them all in a single night, and for Chrysogonus to be sent to him at Aquileia. St Anastasia followed her teacher at a distance.

The emperor interrogated Chrysogonus personally, but could not make him renounce his faith. Therefore, he commanded that he be beheaded and thrown into the sea. The body and severed head of the holy martyr were carried to shore by the waves. There by divine Providence, the relics were found by a presbyter named Zoilus who placed them in a coffer, and concealed them at his home.

St Chrysogonus appeared to Zoilus and informed him that martyrdom was at hand for Agape, Chione and Irene (April 16), three sisters who lived nearby. He told him to send St Anastasia to them to encourage them. St Chrysogonus foretold that Zoilus would also die on the same day. Nine days later, the words of St Chrysogonus were fulfilled. Zoilus fell asleep in the Lord, and St Anastasia visited the three maidens before their tortures. When these three martyrs gave up their souls to the Lord, she buried them.

Having carried out her teacher's request, the saint went from city to city ministering to Christian prisoners. Proficient in the medical arts of the time, she zealously cared for captives far and wide, healing their wounds and relieving their suffering. Because of her labors, St Anastasia received the name Deliverer from Potions (Pharmakolytria), since by her intercessions she has healed many from the effects of potions, poisons, and other harmful substances.

She made the acquaintance of the pious young widow Theodota, finding in her a faithful helper. Theodota was taken for questioning when it was learned that she was a Christian. Meanwhile, St Anastasia was arrested in Illyricum. This occurred just after all the Christian captives there had been murdered in a single night by order of Diocletian. St Anastasia had come to one of the prisons, and finding no one there, she began to weep loudly. The jailers realized that she was a Christian and took her to the prefect of the district, who tried to persuade her to deny Christ by threatening her with torture. After his unsuccessful attempts to persuade St Anastasia to offer sacrifice to idols, he handed her over to the pagan priest Ulpian in Rome.

The cunning pagan offered St Anastasia the choice between luxury and riches, or grievous sufferings. He set before her gold, precious stones and fine clothing, and also fearsome instruments of torture. The crafty man was put to shame by the bride of Christ. St Anastasia refused the riches and chose the tools of torture.

But the Lord prolonged the earthly life of the saint, and Ulpian gave her three days to reconsider. Charmed by Anastasia's beauty, the pagan priest decided to defile her purity. However, when he tried to touch her he suddenly became blind. His head began to ache so severely that he screamed like a madman. He asked to be taken to a pagan temple to appeal to the idols for help, but on the way he fell down and died.

St Anastasia was set free and she and Theodota again devoted themselves to the care of imprisoned Christians. Before long, St Theodota and her three sons accepted a martyrdom. Her eldest son, Evodus, stood bravely before the judge and endured beatings without protest. After lengthy torture, they were all thrown into a red-hot oven.

St Anastasia was caught again and condemned to death by starvation. She remained in prison without food for sixty days. St Theodota appeared to the martyr every night and gave her courage. Seeing that hunger caused St Anastasia no harm whatsoever, the judge sentenced her to drowning together with other prisoners. Among them was Eutychianus, who was condemned for his Christian faith.

The prisoners were put into a boat which went out into the open sea. The soldiers bored holes in the boat and got into a galley. St Theodota appeared to the captives and steered the ship to shore. When they reached dry land, 120 men believed in Christ and were baptized by Sts Anastasia and Eutychianus. All were captured and received a martyr's crown. St Anastasia was stretched between four pillars and burned alive. A certain pious woman named Apollinaria buried her body, which was unharmed by the fire, in the garden outside her house.

Your lamb Anastasia, calls out to You, O Jesus, in a loud voice:
"I love You, my Bridegroom, and in seeking You I endure suffering.
In baptism I was crucified so that I might reign in You, and I died so that I might live with You.
Accept me as a pure sacrifice,
for I have offered myself in love."
Through her prayers save our souls, since You are merciful.

Those in temptations and afflictions hasten to your temple
And are restored by the grace that dwells in you,
For you ever pour forth healings for all the world,
O great Martyr Anastasia!

As a martyr you emulated the deeds of the martyrs,
To whom you ministered,
And, striving valiantly, you overcame the enemy.
You are an abundant and overflowing source of grace
For all who come to you, O godly-minded Anastasia!