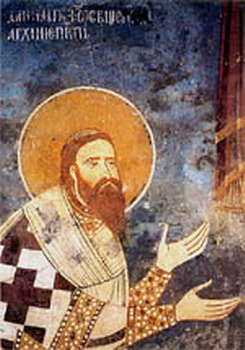 Saint Daniel of Serbia, the only son of rich and renowned parents, was a close associate of the Serbian king Stephan Urosh Milutin. Having renounced a secular career, he received monastic tonsure from the igumen of the St Nicholas monastery at Konchul near the River Ibar. St Daniel's ascetic life was an example for all the brethren.

Archbishop Eustathius of Serbia ordained him presbyter and took him into his cell. When it was time to choose the igumen for the Hilandar monastery on Mount Athos, St Daniel received the appointment. The saint was igumen at a most difficult time for the Holy Mountain. After the Crusaders were expelled from Palestine, they joined with the Arabs to plunder and loot the Athonite monasteries, "not sparing anything sacred."

St Daniel remained at the Hilandar monastery, enduring siege and hunger. When peace came to the Holy Mountain, the saint resigned as igumen and withdrew into complete silence in the cell of St Sava of Serbia (at Karyes). During the internecine war of Kings Milutin and Dragutin and Stephen of Dechani (November 11), the ascetic was summoned to Serbia, where he reconciled the adversaries.

In his native land Daniel was made Bishop of Banja and head of the renowned monastery of St Stephen, a royal treasury. After completing the construction of a cathedral church at Banja in honor of the holy Protomartyr and Archdeacon Stephen, St Daniel returned to his monastic labors on the Holy Mountain.

The saint was summoned from Athos again in 1325, when he was elected Archbishop of Serbia. He was consecrated on the Feast of the Elevation of the Cross of the Lord. The Protos ["head"] of the Holy Mountain, Garbasios, and other Athonite Elders took part in the solemnities.

Archbishop Daniel was a model of piety, and a wise archpastor. His tenure as archbishop was marked by complete non-covetousness, concern and toil for the needs of the Church and the flock, and the building of churches. In 1335 the saint built a church at Dechani in honor of the Ascension of the Lord, one of the finest Christian monuments in Serbia. He collected accounts about the Serbian past, and compiled the "Rodoslov" [Account about the homeland], writing about the lives of Serbian rulers and Serbian archpastors.

Even during his lifetime St Daniel was granted the gift of wonderworking and healing. After fourteen years as archbishop, St Daniel departed to the Lord on December 19, 1338. 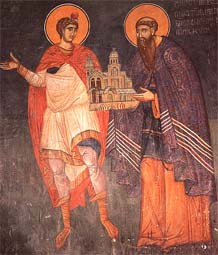