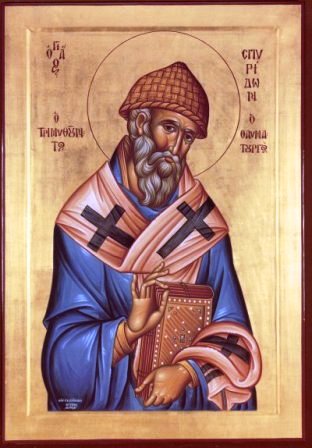 Saint Spyridon of Tremithus was born towards the end of the third century on the island of Cyprus. He was a shepherd, and had a wife and children. He used all his substance for the needs of his neighbors and the homeless, for which the Lord rewarded him with a gift of wonderworking. He healed those who were incurably sick, and cast out demons.

After the death of his wife, during the reign of Constantine the Great (306-337), he was made Bishop of Tremithus, Cyprus. As a bishop, the saint did not alter his manner of life, but combined pastoral service with deeds of charity.

According to the witness of Church historians, St Spyridon participated in the sessions of the First Ecumenical Council in the year 325. At the Council, the saint entered into a dispute with a Greek philosopher who was defending the Arian heresy. The power of St Spyridon's plain, direct speech showed everyone the importance of human wisdom before God's Wisdom: "Listen, philosopher, to what I tell you. There is one God Who created man from dust. He has ordered all things, both visible and invisible, by His Word and His Spirit. The Word is the Son of God, Who came down upon the earth on account of our sins. He was born of a Virgin, He lived among men, and suffered and died for our salvation, and then He arose from the dead, and He has resurrected the human race with Him. We believe that He is one in essence (consubstantial) with the Father, and equal to Him in authority and honor. We believe this without any sly rationalizations, for it is impossible to grasp this mystery by human reason."

As a result of their discussion, the opponent of Christianity became the saint's zealous defender and later received holy Baptism. After his conversation with St Spyridon, the philosopher turned to his companions and said, "Listen! Until now my rivals have presented their arguments, and I was able to refute their proofs with other proofs. But instead of proofs from reason, the words of this Elder are filled with some sort of special power, and no one can refute them, since it is impossible for man to oppose God. If any of you thinks as I do now, let him believe in Christ and join me in following this man, for God Himself speaks through his lips."

At this Council, St Spyridon displayed the unity of the Holy Trinity in a remarkable way. He took a brick in his hand and squeezed it. At that instant fire shot up from it, water dripped on the ground, and only dust remained in the hands of the wonderworker. "There was only one brick," St Spyridon said, "but it was composed of three elements. In the Holy Trinity there are three Persons, but only one God."

Another time, hastening to save his friend, who had been falsely accused and sentenced to death, the saint was hindered on his way by the unanticipated flooding of a stream. The saint commanded the water: "Halt! For the Lord of all the world commands that you permit me to cross so that a man may be saved." The will of the saint was fulfilled, and he crossed over happily to the other shore. The judge, apprised of the miracle that had occurred, received St Spyridon with esteem and set his friend free.

Similar instances are known from the life of the saint. Once, he went into an empty church, and ordered that the lampadas and candles be lit, and then he began the service. When he said, "Peace be unto all," both he and the deacon heard from above the resounding of "a great multitude of voices saying, "And with thy spirit." This choir was majestic and more sweetly melodious than any human choir. To each petition of the litanies, the invisible choir sang, "Lord, have mercy." Attracted by the church singing, the people who lived nearby hastened towards it. As they got closer and closer to the church, the wondrous singing filled their ears and gladdened their hearts. But when they entered into the church, they saw no one but the bishop and several church servers, and they no longer heard the singing which had greatly astonished them."

St Simeon Metaphrastes (November 9), the author of his Life, likened St Spyridon to the Patriarch Abraham in his hospitality. Sozomen, in his CHURCH HISTORY, offers an amazing example from the life of the saint of how he received strangers. One time, at the start of the Forty-day Fast, a stranger knocked at his door. Seeing that the traveller was very exhausted, St Spyridon said to his daughter, "Wash the feet of this man, so he may recline to dine." But since it was Lent there were none of the necessary provisions, for the saint "partook of food only on certain days, and on other days he went without food." His daughter replied that there was no bread or flour in the house. Then St Spyridon, apologizing to his guest, ordered his daughter to cook a salted ham from their larder. After seating the stranger at table, he began to eat, urging that man to do the same. When the latter refused, calling himself a Christian, the saint rejoined, "It is not proper to refuse this, for the Word of God proclaims, "Unto the pure all things are pure" (Titus 1:15).

Another historical detail reported by Sozomen, was characteristic of the saint. It was his custom to distribute one part of the gathered harvest to the destitute, and another portion to those having need while in debt. He did not take a portion for himself, but simply showed them the entrance to his storeroom, where each could take as much as was needed, and could later pay it back in the same way, without records or accountings.

There is also the tale by Socrates Scholasticus about how robbers planned to steal the sheep of St Spyridon. They broke into the sheepfold at night, but here they found themselves all tied up by some invisible power. When morning came the saint went to his flock, and seeing the tied-up robbers, he prayed and released them. For a long while he advised them to leave their path of iniquity and earn their livelihood by respectable work. Then he made them a gift of a sheep and sending them off, the saint said kindly, "Take this for your trouble, so that you did not spend a sleepless night in vain."

All the Lives of the saint speak of the amazing simplicity and the gift of wonderworking granted him by God. Through a word of the saint the dead were awakened, the elements of nature tamed, the idols smashed. At one point, a Council had been convened at Alexandria by the Patriarch to discuss what to do about the idols and pagan temples there. Through the prayers of the Fathers of the Council all the idols fell down except one, which was very much revered. It was revealed to the Patriarch in a vision that this idol had to be shattered by St Spyridon of Tremithus. Invited by the Council, the saint set sail on a ship, and at the moment the ship touched shore and the saint stepped out on land, the idol in Alexandria with all its offerings turned to dust, which then was reported to the Patriarch and all the bishops.

St Spyridon lived his earthly life in righteousness and sanctity, and prayerfully surrendered his soul to the Lord. His relics repose on the island of Corfu (Kerkyra), in a church named after him (His right hand, however, is located in Rome). His memory is also celebrated on Cheesefare Saturday.

You were revealed as a champion of the First Council
and a wonderworker, our God-bearing father Spyridon.
You spoke to one dead in the grave
and transformed a serpent into gold.
While chanting your holy prayers
you had angels serving with you!

Wounded by the love of Christ,
all-holy one, your mind was given wings through the light of the Spirit,
you found work in active contemplation, God-pleasing Spyridon,
becoming a divine sacrifice,
and imploring divine illumination for all. 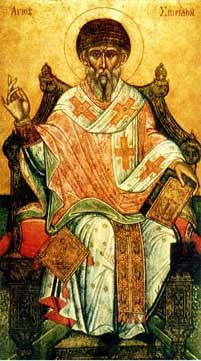