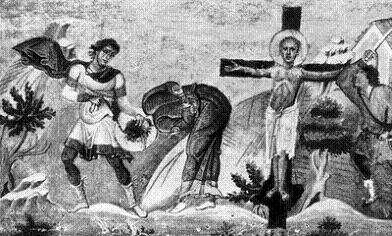 The Holy Martyr Gemellus of Paphlagonia was subjected to cruel tortures for his staunch denunciation of the emperor Juilan the Apostate (361-363) in the city of Ancyra (Galatia). A red-hot iron belt was placed around his waist. Then he was ordered to accompany the impious Julian on his journey. When they reached Edessa in Mesopotamia, he was stretched out on the ground and his limbs were pierced with wooden stakes. Then he was hung on a post and mutilated.

Enduring the tortures, the saint continued to revile the emperor. After being subjected to even more horrible torments, they let him go. He was still able to walk and speak, so he went on his way until he met a priest. He entreated the priest to baptize him, and when he emerged from the water, his wounds were all healed.

Hearing of this miracle, Julian ordered that St Gemellus be crucified. The victorious athlete of Christ gave up his soul to God, and his body was secretly taken down and buried by Christians.