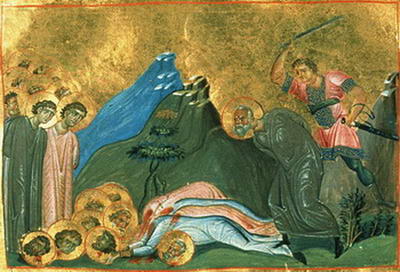 The Hieromartyr Sadoc, Bishop of Persia, and 128 Martyrs with him suffered in Persia under Sapor II. St Sadoc was successor of the hieromartyr Simeon (April 17). He once had a dream, in which St Simeon told him of his own impending martyric death. Standing in great glory atop a ladder reaching up to Heaven, St Simeon said, "Ascend to me, Sadoc, and be not afraid. Yesterday I ascended, and today you will ascend."

Soon the emperor Sapor, renewing the persecution against Christians, ordered that St Sadoc be arrested with his clergy and flock. In all, 128 people were arrested, including nine virgins. They were thrown into prison, where they were cruelly tortured for five months. They were told to renounce the Christian Faith and instead to worship the sun and fire. The holy martyrs bravely answered, "We are Christians and worship the One God." They were sentenced to beheading by the sword.