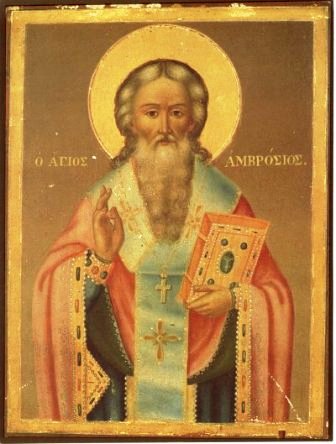 Saint Ambrose, Bishop of Milan, was born in the year 340 into the family of the Roman prefect of Gaul (now France). Even in the saint's childhood there appeared presentiments of his great future. Once, bees covered the face of the sleeping infant. They flew in and out of his mouth, leaving honey on his tongue. Soon they flew away so high that they could no longer be seen. Ambrose's father said that the child would become something great when he reached manhood.

After the death of the father of the family, Ambrose journeyed to Rome, where the future saint and his brother Satyrius received an excellent education. About the year 370, upon completion of his course of study, Ambrose was appointed to the position of governor (consular prefect) of the districts of Liguria and Aemilia, though he continued to live at Mediolanum (now Milan).

In the year 374 Auxentius, the Arian Bishop of Mediolanum, died. This led to complications between the Orthodox and the Arians, since each side wanted to have its own bishop. Ambrose, as the chief city official, went to the church to resolve the dispute.

While he was speaking to the crowd, suddenly a child cried out,"Ambrose for bishop!" The people took up this chant. Ambrose, who at this time was still a catechumen, considered himself unworthy, and tried to refuse. He disparaged himself, and even tried to flee from Mediolanum. The matter went ultimately before the emperor Valentinian the Elder (364-375), whose orders Ambrose dared not disobey. He accepted holy Baptism from an Orthodox priest and, passing through all the ranks of the Church clergy in just seven days, on December 7, 374 he was consecrated Bishop of Mediolanum. He dispersed all his possessions, money and property for the adornment of churches, the upkeep of orphans and the poor, and he devoted himself to a strict ascetic life.

Ambrose combined strict temperance, intense vigilance and work within the fulfilling of his duties as archpastor. St Ambrose, defending the unity of the Church, energetically opposed the spread of heresy. Thus, in the year 379 he traveled off to establish an Orthodox bishop at Sirmium, and in 385-386 he refused to hand over the basilica of Mediolanum to the Arians.

The preaching of St Ambrose in defense of Orthodoxy was deeply influential. Another noted Father of the Western Church, St Augustine (June 15), bore witness to this, having accepted holy Baptism in the year 387 by the grace of the preaching of the bishop of Mediolanum.

St Ambrose also actively participated in civil matters. Thus, the emperor Gracian (375-383), having received from him the "Exposition of the Orthodox Faith" (De Fide), removed, by decree of the saint, the altar of Victory from the halls of the Senate at Rome, on which oaths were wont to be taken. Displaying a pastoral boldness, St Ambrose placed a severe penance on the emperor Theodosius I (379-395) for the massacre of innocent inhabitants of Thessalonica. For him there was no difference between emperor and commoner. Though he released Theodosius from the penance, the saint would not permit the emperor to commune at the altar, but compelled him to do public penance.

The fame of Bishop Ambrose and his actions attracted to him many followers from other lands. From faraway Persia learned men came to him to ask him questions and absorb his wisdom. Fritigelda (Frigitil), queen of the military Germanic tribe of the Markomanni, which often had attacked Mediolanum, asked the saint to instruct her in the Christian Faith. The saint in his letter to her persuasively stated the dogmas of the Church. And having become a believer, the queen converted her own husband to Christianity and persuaded him to conclude a treaty of peace with the Roman Empire.

The saint combined strictness with an uncommon kindliness. Granted a gift of wonderworking, he healed many from sickness. One time at Florence, while staying at the house of Decentus, he resurrected a dead boy.

The repose of St Ambrose, who departed to the Lord on the night of Holy Pascha, was accompanied by many miracles. He even appeared in a vision to the children being baptized that night. The saint was buried in the Ambrosian basilica in Mediolanum, beneath the altar, between the Martyrs Protasius and Gervasius (October 14).

A zealous preacher and valiant defender of the Christian Faith, St Ambrose received particular renown as a Church writer. In dogmatic compositions he set forth the Orthodox teaching about the Holy Trinity, the Sacraments, and Repentance: "Five Books on the Faith" (De Fide); "Explication of the Symbol of the Faith" (Explanatio Symboli); "On the Incarnation" (De Incarnationis); "Three Books on the Holy Spirit" (De Spiritu Sancto); "On the Sacraments" (De Sacramento); "Two Books on Repentance" (De Paenitentia). In writings about Christian morality, he explained the excellence of Christian moral teaching compared to pagan moral teaching.

St Ambrose was also a reformer of Church singing. He introduced antiphonal singing (along the Eastern or Syrian form) into the Western Church, which became known as "Ambrosian Chant." He also composed twelve hymns which were used during his lifetime. The hymn, "Thee, O God, we praise" (Te Deum), attributed to St Ambrose, entered into the divine services of the Orthodox Church (Molieben).

In truth you were revealed to your flock as a rule of faith,
an image of humility and a teacher of abstinence;
your humility exalted you;
your poverty enriched you.
Hierarch Father Ambrose,
entreat Christ our God
that our souls may be saved.

You shone forth with divine doctrine eclipsing the deception of Arius,
shepherd and initiate of the mysteries, Ambrose.
you worked miracles through the power of the Spirit,
healing various passions;
righteous father, entreat Christ our God to grant us His great mercy. 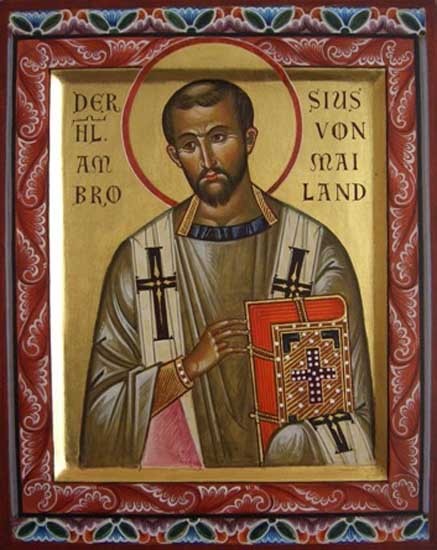