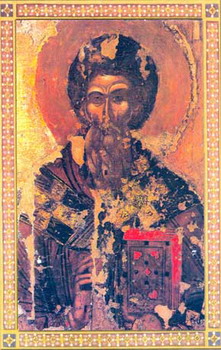 Saint Arsenius, Archbishop of Kerkyra (Corfu), was a native of Palestine and lived in the ninth century. He led a strict ascetic life, and was a highly educated man and renowned spiritual writer. He was glorified by wisdom, and by the constantly defended his flock from the wrath of the emperor Constantine (979-1028).

Because of his great virtue, St Arsenius was consecrated as Archbishop of Kerkyra. He became a defender of widows, a father to orphans, and a comfort for the sorrowful, and so God rewarded him with the gift of miracles.

He fell asleep in the Lord toward the end of the ninth century. His relics were placed in the cathedral at Kerkyra, and many miracles and healings took place at his tomb.

St Arsenius composed the Canon chanted during the Sanctification of Oil, a Panegyric on the Apostle Andrew, and a Discourse on the Suffering of the Great Martyr Barbara. Several of his letters to St Photius (February 6) still survive.