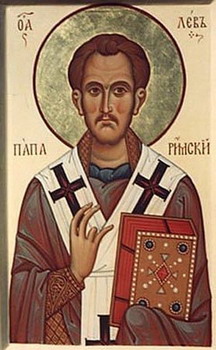 Saint Leo I the Great, Pope of Rome (440-461), received a fine and diverse education, which opened for him the possibility of an excellent worldly career. He yearned for the spiritual life, however, and so he chose the path of becoming an archdeacon under holy Pope Sixtus III (432-440), after whose death St Leo was chosen as Bishop of Rome in September 440.

These were difficult times for the Church, when heretics assaulted Orthodoxy with their false teachings. St Leo combined pastoral solicitude and goodness with an unshakable firmness in the confession of the Faith. He was in particular one of the basic defenders of Orthodoxy against the heresies of Eutyches and Dioscorus, who taught that there was only one nature in the Lord Jesus Christ. He was also a defender against the heresy of Nestorius.

He exerted all his influence to put an end to the unrest by the heretics in the Church, and by his letters to the holy emperors Theodosius II (408-450) and Marcian (450-457), he actively promoted the convening of the Fourth Ecumenical Council, at Chalcedon in 451, to condemn the heresy of the Monophysites.

At the Council at Chalcedon, at which 630 bishops were present, a letter of St Leo to the deceased St Flavian, Patriarch of Constantinople (447-449) was read. St Flavian had suffered for Orthodoxy under the "Robber Council" of Ephesus in the year 449. In the letter of St Leo the Orthodox teaching about the two natures [the divine and the human] in the Lord Jesus Christ was set forth. All the bishops present at the Council were in agreement with this teaching, and so the heretics Eutyches and Dioscorus were excommunicated from the Church.

St Leo was also a defender of his country against the incursions of barbarians. In 452, by the persuasive power of his words, he stopped Attila the Hun from pillaging Italy. Again in the year 455, when the leader of the Vandals [a Germanic tribe], Henzerich, turned towards Rome, he persuaded him not to pillage the city, burn buildings, nor to spill blood.

He knew the time of his death beforehand, and he prepared himself, with forty days of fasting and prayer, to pass from this world into eternity.

He died in the year 461 and was buried at Rome. His literary and theological legacy is comprised of 96 sermons and 143 letters, of which the best known is his Epistleto St Flavian.

You were the Church's instrument
in strengthening the teaching of true doctrine;
you shone forth from the West like a sun dispelling the errors of the heretics.
Righteous Leo, entreat Christ God to grant us His great mercy.

O Champion of Orthodoxy, and teacher of holiness,
The enlightenment of the universe and the inspired glory of true believers.
O most wise Father Leo, your teachings are as music of the Holy Spirit for us!
Pray that Christ our God may save our souls!

Seated upon the throne of the priesthood, glorious Leo,
you shut the mouths of the spiritual lions.
With divinely inspired teachings of the honored Trinity,
you shed the light of the knowledge of God up-on your flock.
Therefore, you are glorified as a divine initiate of the grace of God. 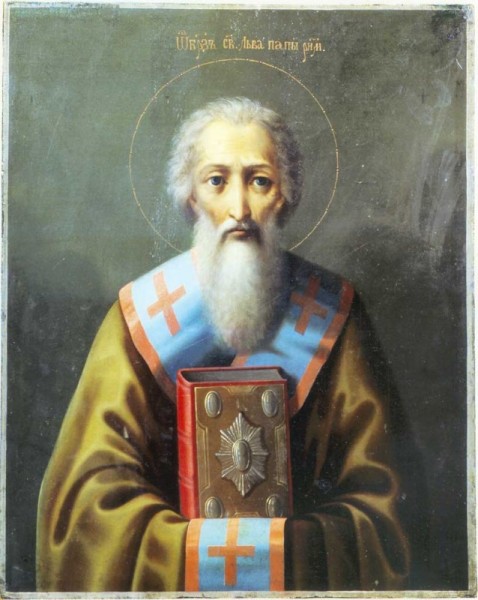 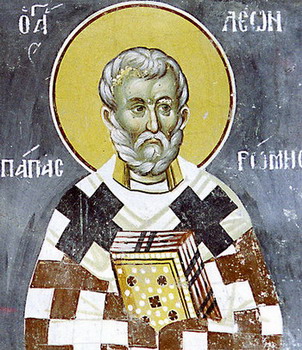