Our Holy Father Gennadius of Vatopedi 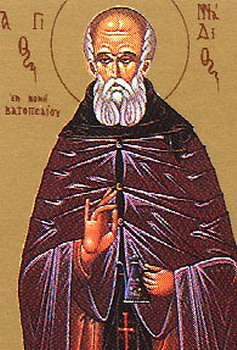 Saint Gennadius was the steward of the Vatopedi monastery on Mt Athos in the fourteenth century, and was in charge of supplies. When the monastery's oil began to run low, he tried to be economical with what remained by using oil just for the needs of the church. The cook began to complain to the Igumen, saying that he had no oil for preparing meals. The Igumen ordered St Gennadius to place his trust in the Mother of God, and to supply the oil for all the monastery's needs.

One day, St Gennadius went to the storeroom and saw the tank overflowing with oil covering the floor as far as the door. This miracle was ascribed to the Most Holy Theotokos, and to Her Elaiovrytissa icon which stood nearby. Since that time, the icon has hung in the storeroom and has emitted an ineffable fragrance.