Our Holy Father Nikhon of Radonezh 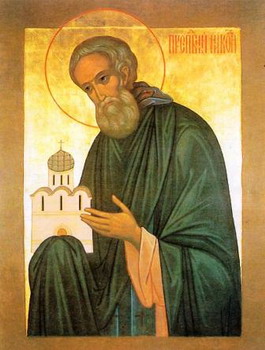 Saint Nikon, Abbot of Radonezh, a disciple and successor of St Sergius of Radonezh (September 25 and July 5), was born at Yuriev-Polsk. Having heard of the angelic life of the Radonezh Wonderworker, the young man came to St Sergius and requested to be tonsured into the angelic schema.

St Sergius did not accept Nikon, whether because of his youth or for some other reason. Instead, he sent him to his disciple St Athanasius (September 12) at Serpukhov. But St Athanasius would not accept him right away. Only after seeing the young man's persistence did he tonsure him into the monastic schema.

St Nikon struggled in prayer, studied Holy Scripture and persevered in virtue and purity. Because of his humility and the way he fulfilled each task assigned him without argument, St Nikon was called a "zealot of obedience." When he reached the age of thirty, he was ordained to the priesthood. After a certain while, St Athanasius blessed him to go see St Sergius. St Sergius, catching sight of him, said, "It is good that you have come, my child Nikon," and happily received him.

At first, he gave orders for St Nikon to serve the brethren. The disciple passed whole days in monastic matters, and his nights in prayerful conversation with God. St Sergius was comforted by his virtuous life. Having received a special insight concerning him, St Sergius bade his disciple to dwell with him in his own cell, so that he might share in spiritual attainment. He instructed him in every monastic virtue, and explained much about the essence of spiritual life. St Sergius assigned St Nikon to the duty of assisting him, but six months before his repose, he appointed his disciple as his successor. Then St Sergius withdrew into seclusion.

After the death of St Sergius (September 25, 1392), Nikon carried out his duties exactly as he was instructed by the founder of the monastery. He had the habit of attending all the monastic services, and never did he forsake common tasks, working on a equal footing with all the brethren. But the burden of being the igumen of the monastery weighed upon St Nikon. Recalling his quiet life in the Serpukhov Vysotsk monastery with St Athanasius, and later with St Sergius, he gave up his position and retired to his own cell.

For six years the monastery was guided by St Sava of Storozhevsk (December 3). In the year 1400 St Sava founded his own monastery near Zvenigorod, and the brethren entreated St Nikon to again take over its direction. He consented, but allotted himself a certain time each day for silence, so as to stand alone before God.

When reports began to spread about an invasion of the Russian land by Khan Edigei (1408), St Nikon zealously prayed to God to spare the monastery. In a dream the Moscow hierarchs Peter (December 21) and Alexis (February 12) together with St Sergius appeared to him and said that he should not grieve over the destruction of the monastery, since it would not become desolate, but would flourish all the more.

The monks left the monastery, taking with them relics, books, and consecrated vessels. When they returned, they saw that their beloved place had been reduced to ashes. But St Nikon did not despair, and the brethren began to restore the monastery. First of all a wooden church was built in honor of the Most Holy Trinity. It was consecrated on September 25, 1411, the anniversary of the repose of St Sergius.

The monastery was restored, and St Nikon began construction of a stone church over the grave of his spiritual Father, St Sergius. The work crew digging the foundations uncovered the incorrupt relics of St Sergius on July 5, 1422. Amidst universal rejoicing they placed the relics in a new reliquary and at the new site a wooden church was built (now the church in honor of the Descent of the Holy Spirit is at this place). St Nikon later built a new stone church in the Name of the Most Holy Trinity. In honor and memory of his spiritual Father, he transferred the holy relics into this newly built church.

St Nikon brought in the finest iconographers, Sts Andrew Rublev (July 4) and Daniel Cherny (June 13) for the adornment of the temple. Then St Andrew painted the Icon of the Most Holy Trinity (Hospitality of Abraham), embodying what was revealed to St Sergius. St Nikon was occupied with the construction of the Trinity church until the end of his life.

St Nikon's final resting place was revealed to him in a vision before his death. He summoned the brethren and gave them instructions. After receiving the All-Pure Body of Christ and His Precious Blood, St Nikon gave the brethren a last blessing and said, "Go forth, my soul, with joy to the place where repose is prepared for you. Christ is calling you."

Having made the Sign of the Cross, St Nikon died on November 27, 1426. He was buried near the reliquary of St Sergius. Under the hierarch Jonah (1448-1461), the hieromonk Pachomius the Logothete wrote the Service and Life of St Nikon. In the year 1547 a generally observed celebration to him was established. In the year 1548 a church named for him was built over the grave of St Nikon. In 1623 a new one was constructed in its place, in which the relics of St Nikon rest in a crypt. The 500 year anniversary of the repose of St Nikon was solemnly observed in 1976 at the Trinity-Sergeev Lavra.