Saint Justinian, a major figure in the history of the Byzantine state, was also a great champion of Orthodoxy, a builder of churches and a Church writer. He is said to be of Slavic descent, perhaps born in Bulgaria. During his reign (527-565) Byzantium won glory with military victories in Persia, Africa, Italy, as a result of which paganism was decisively routed among the Germanic Vandals and Visigoth tribes. By command of the emperor Justinian the pagan schools in Athens were closed. Justinian sent John, the Bishop of Ephesus, throughout the regions of Asia Minor with the aim of spreading Christianity. John baptized more than 70 thousand pagans.

The emperor gave orders to build ninety churches for the newly-converted, and he generously supported church construction within the Empire. His finest structures of the time are considered to be the monastery at Sinai, and the church of Hagia Sophia at Constantinople. Under St Justinian many churches were built dedicated to our Most Holy Lady Theotokos. Since he had received a broad education, St Justinian assiduously concerned himself with the education of clergy and monks, ordering them to be instructed in rhetoric, philosophy and theology.

The right-believing sovereign devoted much attention and effort to the struggle with the Origenists of his time, who then were reviving the Nestorian heresy. To counter their heretical speculations, the Church hymn "Only-Begotten Son and Immortal Word of God, Who for our salvation..." was composed, and Justinian commanded that it be sung in the churches. From that time to the present day, this hymn is sung at the Divine Liturgy before the Small Entrance after the second Antiphon.

At the command of the sovereign, the Fifth Ecumenical Council was convened in the year 553, censuring the teachings of Origen and affirming the definitions of the Fourth Ecumenical Council at Chalcedon. He also attempted to secure religious unity within the Empire through his (unsuccessful) dialogues with the non-Chalcedonians.

The holy Emperor Justinian wished to have orderly rule and law within the realm. Under his guidance and supervision a complete compendium of Roman law was compiled. It has come down to us as a law codex known as "the Justinian Codex." The "Church laws" of Justinian are included in all the variants of the Russian collections of Canon Law.

In his personal life, St Justinian was strictly pious, and he fasted often. During Great Lent he would not eat bread nor drink wine. He is also remembered for promoting the idea of "symphony" between church and state. The holy Emperor Justinian died in the year 565.

The Empress Theodora, who died in the year 548, was also numbered among the saints with her husband. She was at first a notorious harlot and actress, and an adherent of the Monophysite heresy, but then she repented. After becoming empress, she led a virtuous life, maintaining purity of both soul and body. She provided wise counsel for her husband during his reign, and she also saved his throne during the Nika riots of 532 by her political intelligence and expertise. 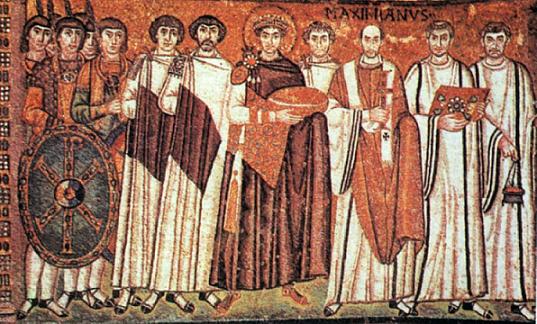