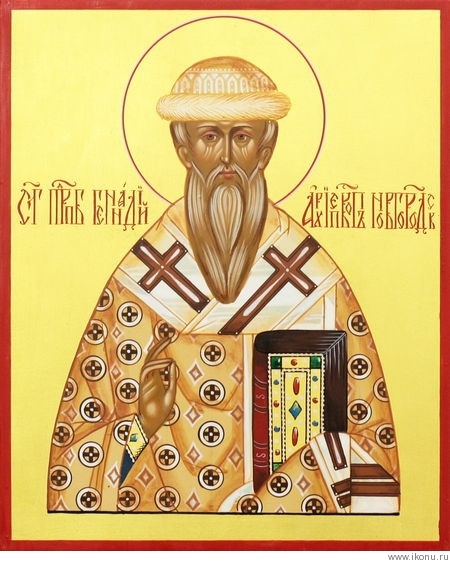 Saint Gennadius, Archbishop of Novgorod, was descended from the Gonzov family and was, in the testimony of contemporaries, "dignified, intelligent, virtuous and learned in the Holy Scripture." His was made a monk at the Valaam monastery, under the spiritual guidance of St Sabbatius of Solovki (September 27). From the year 1472, he was Archimandrite of the Chudov (Miracle of the Archangel Michael) monastery in Moscow. Zealous for celebrating divine services according to the Typikon, he and Bassian, Archbishop of Rostov, and later his successor Joasaph, fearlessly rose up in defense of the ancient Rule during a dispute about moving "like the sun" (from east to west) at the consecration of the Dormition cathedral in Moscow during the years 1479-1481.

In 1483 St Gennadius began construction of a stone church at the Chudov monastery in honor of St Alexis, Metropolitan of Moscow (February 12), the founder of the monastery. On December 12, 1484 St Gennadius was consecrated as Archbishop of Novgorod. Already in Novgorod, but still honoring the memory of St Alexis, Gennadius did not cease to concern himself with the construction of the church, even contributing silver for the completion of this temple.

The time of holy Archbishop Gennadius as hierarch at Novgorod coincided with a terrible period in the history of the Russian Church. In 1470, Judaizing preachers, who traveled to Novgorod in the guise of merchants, had already begun to plant the weeds of heresy and apostasy among the Orthodox.

The first reports about the heresy reached St Gennadius in the year 1487. Four members of a secret society, in a state of intoxication, opened up and told the Orthodox of the existence of the impious heresy. As soon as it became known to him, the zealous archpastor immediately began an inquiry and with deep sorrow became convinced that the danger was a threat not only to local Novgorod piety, but also in Moscow, the very capital of Orthodoxy, where the leaders of the Judaizers had journeyed in 1480.

In September 1487 he sent to Metropolitan Gerontius at Moscow all the material from the inquiry, together with a list of the apostates he had discovered, as well as their writings. The struggle with the Judaizers became the main focus of St Gennadius' archpastoral activity. In the words of St Joseph of Volokolamsk (September 9), "this archbishop, angered by the malevolent heretics, pounced upon them like a lion from out of the thicket of the Holy Scriptures and the splendid heights of the prophets and the apostolic teachings."

For twelve years St Gennadius and St Joseph struggled against the most powerful attempts of the opponents of Orthodoxy to alter the course of history of the Russian Church and the Russian state. By their efforts the Orthodox were victorious. The works of Gennadius in the study of the Bible contributed to this victory. The heretics in their impious cleverness used texts from the Old Testament, but which were different from the texts accepted by the Orthodox. Archbishop Gennadius undertook an enormous task: bringing the correct listings of Holy Scripture together in a single codex. Up until this time Biblical books had been copied in Russia, following the example of Byzantium, not in their entirety, but in separate parts - the Pentateuch (first five books) or Octateuch (first eight books), Kings, Proverbs, the Psalter, the Prophets, the Gospels, the Epistles, and other instructive books.

The holy books of the Old Testament in particular often were subjected to both accidental and intentional errors. St Gennadius wrote about this with sorrow in a letter to Archbishop Joasaph: "The Judaizing heretical tradition adheres to the Psalms of David, or prophecies which they have altered." Gathering around himself learned and industrious Biblical scholars, the saint collected all the books of the Holy Scripture into a single codex, and he gave his blessing for the Holy Books which were not found in manuscripts of the traditional Slavonic Bible to be retranslated from the Latin language. In 1499 the first complete codex of Holy Scripture in Slavonic ("the Gennadius Bible," as they called it after its compiler) was published in Russia. This work became an integral link in the succession of Slavonic translations of the Word of God. From the God-inspired translation of the Holy Scripture by Sts Cyril and Methodius, through the Bible of St Gennadius (1499), reproduced in the first printed Bible (Ostrozh, 1581). The Church has maintained a Slavonic Biblical tradition right through the so-called Elizabethan Bible (1751) and all successive printed editions.

Together with the preparation of the Bible, the circle of church scholars under Archbishop Gennadius also undertook a great literary task: the compilation of the "Fourth Novgorod Chronicle." Numerous hand-written books were translated, corrected and transcribed, bringing the Chronicle up to the year 1496.

The majority of the books transcribed with the blessing of the Novgorod hierarch (more than 20), were preserved in the collection of Solovki manuscripts. Ever a zealous advocate for spiritual enlightenment, St Gennadius founded a school for the preparation of worthy clergy at Novgorod.

The memory of St Gennadius is preserved also in his work for the welfare of the Orthodox Church.

At the end of the fifteenth century many Russians were concerned about the impending end of the world, which they believed would take place at the end of the seventh millenium from the creation of the world (in 1492 A.D.). Therefore, in 1408, it was decided not to compute the Paschal dates beyond the year 1491. In September 1491, however, the Archbishops' Council of the Russian Church at Moscow, with the participation of St Gennadius, decreed that the Paschalion for the eighth millenium be calculated.

Metropolitan Zosimas at Moscow on November 27, 1492 "set forth a cathedral Paschalion for twenty years," and asked Bishop Philotheus of Perm and Archbishop Gennadius of Novgorod each to compile their own Paschalion for conciliar review and confirmation on December 21, 1492. St Gennadius finished calculating his Paschalion, which in contrast to that of the Metropolitan, extended for seventy years. It was distributed to the dioceses, with the approval of the Council, as the accepted Paschalion for the next twenty years. Included with the Paschalion was St Gennadius's own commentary upon it in an encyclical entitled, "Source for the Paschalion Transposed to the Eight Thousandth Year."

In his theological explanation of the Paschalion, based upon the Word of God and the holy Fathers, the saint wrote: "It is proper not to fear the end of the world, but rather to await the coming of Christ at every moment. For just as God might deign to end the world, so also might He deign to prolong the course of time."

No one knows when the world created by God will end, "not even the angels of heaven, nor the Son, but only the Father "(Mt. 24:36). Therefore, the holy Fathers, inspired by the Holy Spirit, explained the cycle of years from the creation of the world precisely as a cycle. "This occurs in a circular motion, not having an end." The saint contrasts the heretical methods of calculating the times with the way hallowed by the Church, a constant spiritual sobriety. St Gennadius expounded on the theological fundamentals of the Paschalion. He explained that on the basis of the cycle of years from the world's creation, it is possible to determine a Paschalion for the future, as may be required. The Paschalion of St Gennadius, by his own testimony, was not something new that he created, but rather was based on a former tradition; in part, on the basis of the Paschalion for 1360-1492 under St Basil Kalika, Archbishop of Novgorod (July 3).

In 1539, under Archbishop Macarius of Novgorod, a Paschalion was compiled for the eighth millenium, based on the principles of the Paschalion of St Gennadius.

A prayer to the Most Holy Theotokos, which he composed in 1497, also demonstrates his deep spiritual life and prayerful inspiration. In addition to his letters to Metropolitans Zosimas and Simon, to Archbishop Joasaph, to Bishops Niphon and Prochorus, and a letter to the 1490 Council, Archbishop Gennadius also wrote a church "Small Rule" and the "Tradition for Monks," who live according to the monastic Rule of skete life.

Leaving his archpastoral service in 1504, the saint lived in retirement at the Chudov monastery, where he peacefully fell asleep in the Lord on December 4, 1505. In the Stepen-Ranks book we read: "Archbishop Gennadius served as archbishop for nineteen years, beautifying the churches, improving the behavior of the clergy, and proclaiming the Orthodox Faith among the heretics. Then he lived at Moscow for a year and a half at the Chudov monastery, dedicated to the Miracle of the Archangel Michael and to St Alexis the Metropolitan and wonderworker, where he had been Archimandrite, and then he fell asleep in the Lord."

The holy relics of St Gennadius were put into the church of the Miracle of the Archangel Michael at Chonae (September 6), in that place particularly venerated by him, where the relics of St Alexis, Metropolitan of Moscow rested. St Gennadius is also commemorated on the third Sunday after Pentecost, when the Church remembers all the Saints who shone forth at Novgorod.