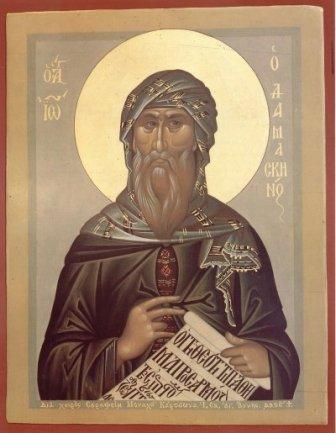 Saint John of Damascus was born about the year 680 at Damascus, Syria into a Christian family. His father, Sergius Mansur, was a treasurer at the court of the caliph. John had also a foster brother, the orphaned child Cosmas (October 14), whom Sergius had taken into his own home. When the children were growing up, Sergius saw that they received a good education. At the Damascus slave market he ransomed the learned monk Cosmas of Calabria from captivity and entrusted to him the teaching of his children. The boys displayed uncommon ability and readily mastered their courses of the secular and spiritual sciences. After the death of his father, John occupied ministerial posts at court and became the city prefect.

In Constantinople at that time, the heresy of Iconoclasm had arisen and quickly spread, supported by the emperor Leo III the Isaurian (717-741). Rising up in defense of the Orthodox veneration of icons [Iconodoulia], St John wrote three treatises entitled, "Against Those who Revile the Holy Icons." The wise and God-inspired writings of St John enraged the emperor. But since the author was not a Byzantine subject, the emperor was unable to lock him up in prison, or to execute him. The emperor then resorted to slander. A forged letter to the emperor was produced, supposedly from John, in which the Damascus official was supposed to have offered his help to Leo in conquering the Syrian capital.

This letter and another hypocritically flattering note were sent to the Saracen caliph by Leo the Isaurian. The caliph immediately ordered that St John be removed from his post, that his right hand be cut off, and that he be led through the city in chains.

That same evening, they returned the severed hand to St John. The saint pressed it to his wrist and prayed to the Most Holy Theotokos to heal him so that he could defend the Orthodox Faith and write once again in praise of the Most Pure Virgin and Her Son. After a time, he fell asleep before the icon of the Mother of God. He heard Her voice telling him that he had been healed, and commanding him to toil unceasingly with his restored hand. Upon awakening, he found that his hand had been attached to his arm once more. Only a small red mark around his wrist remained as a sign of the miracle.

When he learned of the miracle, which demonstrated John's innocence, the caliph asked his forgiveness and wanted to restore him to his former office, but the saint refused. He gave away his riches to the poor, and went to Jerusalem with his stepbrother and fellow-student, Cosmas. There he entered the monastery of St Sava the Sanctified as a simple novice.

It was not easy for him to find a spiritual guide, because all the monks were daunted by his great learning and by his former rank. Only one very experienced Elder, who had the skill to foster the spirit of obedience and humility in a student, would consent to do this. The Elder forbade John to do anything at all according to his own will. He also instructed him to offer to God all his labors and supplications as a perfect sacrifice, and to shed tears which would wash away the sins of his former life.

Once, he sent the novice to Damascus to sell baskets made at the monastery, and commanded him to sell them at a certain inflated price, far above their actual value. He undertook the long journey under the searing sun, dressed in rags. No one in the city recognized the former official of Damascus, for his appearance had been changed by prolonged fasting and ascetic labors. However, St John was recognized by his former house steward, who bought all the baskets at the asking price, showing compassion on him for his apparent poverty.

One of the monks happened to die, and his brother begged St John to compose something consoling for the burial service. St John refused for a long time, but out of pity he yielded to the petition of the grief-stricken monk, and wrote his renowned funeral troparia ("What earthly delight," "All human vanity," and others). For this disobedience the Elder banished him from his cell. John fell at his feet and asked to be forgiven, but the Elder remained unyielding. All the monks began to plead for him to allow John to return, but he refused. Then one of the monks asked the Elder to impose a penance on John, and to forgive him if he fulfilled it. The Elder said, "If John wishes to be forgiven, let him wash out all the chamber pots in the lavra, and clean the monastery latrines with his bare hands."

John rejoiced and eagerly ran to accomplish his shameful task. After a certain while, the Elder was commanded in a vision by the All-Pure and Most Holy Theotokos to allow St John to write again. When the Patriarch of Jerusalem heard of St John, he ordained him priest and made him a preacher at his cathedral. But StJohn soon returned to the Lavra of St Sava, where he spent the rest of his life writing spiritual books and church hymns. He left the monastery only to denounce the iconoclasts at the Constantinople Council of 754. They subjected him to imprisonment and torture, but he endured everything, and through the mercy of God he remained alive. He died in about the year 780, more than 100 years old.

St John of Damascus was a theologian and a zealous defender of Orthodoxy. His most important book is the Fount of Knowledge. The third section of this work, "On the Orthodox Faith," is a summary of Orthodox doctrine and a refutation of heresy. Since he was known as a hymnographer, we pray to St John for help in the study of church singing.

Champion of Orthodoxy, teacher of purity and of true worship,
the enlightener of the universe and the adornment of hierarchs:
all-wise father John, your teachings have gleamed with light upon all things.
Intercede before Christ God to save our souls.

Let us sing praises to John, worthy of great honor,
the composer of hymns, the star and teacher of the Church, the defender of her doctrines:
through the might of the Lord¹s Cross he overcame heretical error
and as a fervent intercessor before God
he entreats that forgiveness of sins may be granted to all. 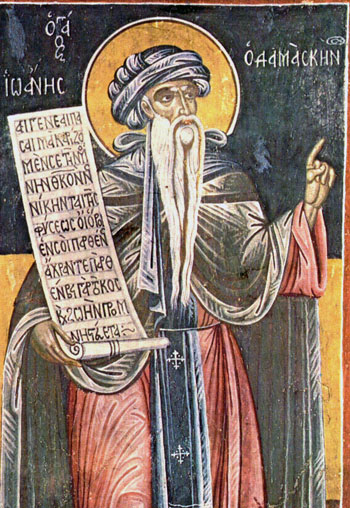 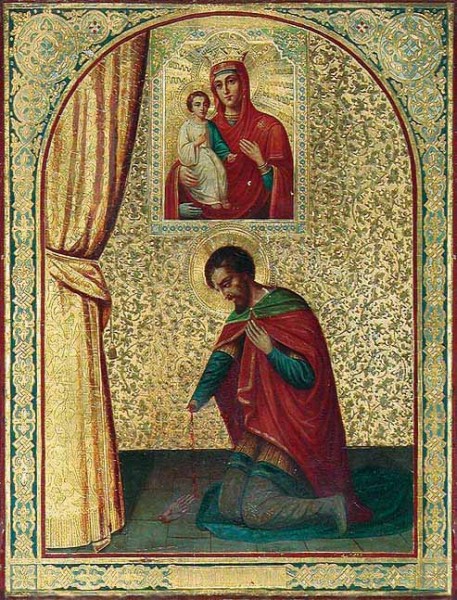