The Holy and Great Martyr Barbara 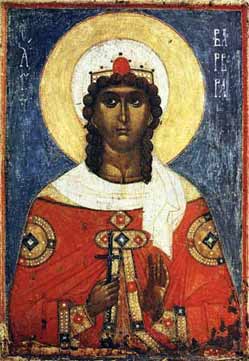 The Holy Great Martyr Barbara lived and suffered during the reign of the emperor Maximian (305-311). Her father, the pagan Dioscorus, was a rich and illustrious man in the Syrian city of Heliopolis. After the death of his wife, he devoted himself to his only daughter.

Seeing Barbara's extraordinary beauty, Dioscorus decided to hide her from the eyes of strangers. Therefore, he built a tower for Barbara, where only her pagan teachers were allowed to see her. From the tower there was a view of hills stretching into the distance. By day she was able to gaze upon the wooded hills, the swiftly flowing rivers, and the meadows covered with a mottled blanket of flowers; by night the harmonious and majestic vault of the heavens twinkled and provided a spectacle of inexpressible beauty. Soon the virgin began to ask herself questions about the First Cause and Creator of so harmonious and splendid a world.

Gradually, she became convinced that the souless idols were merely the work of human hands. Although her father and teachers offered them worship, she realized that the idols could not have made the surrounding world. The desire to know the true God so consumed her soul that Barbara decided to devote all her life to this goal, and to spend her life in virginity.

The fame of her beauty spread throughout the city, and many sought her hand in marriage. But despite the entreaties of her father, she refused all of them. Barbara warned her father that his persistence might end tragically and separate them forever. Dioscorus decided that the temperament of his daughter had been affected by her life of seclusion. He therefore permitted her to leave the tower and gave her full freedom in her choice of friends and acquaintances. Thus Barbara met young Christian maidens in the city, and they taught her about the Creator of the world, about the Trinity, and about the Divine Logos. Through the Providence of God, a priest arrived in Heliopolis from Alexandria disguised as a merchant. After instructing her in the mysteries of the Christian Faith, he baptized Barbara, then returned to his own country.

During this time a luxurious bathhouse was being built at the house of Dioscorus. By his orders the workers prepared to put two windows on the south side. But Barbara, taking advantage of her father's absence, asked them to make a third window, thereby forming a Trinity of light. On one of the walls of the bath-house Barbara traced a cross with her finger. The cross was deeply etched into the marble, as if by an iron instrument. Later, her footprints were imprinted on the stone steps of the bathhouse. The water of the bathhouse had great healing power. St Simeon Metaphrastes (November 9) compared the bathhouse to the stream of Jordan and the Pool of Siloam, because by God's power, many miracles took place there.

When Dioscorus returned and expressed dissatisfaction about the change in his building plans, his daughter told him about how she had come to know the Triune God, about the saving power of the Son of God, and about the futility of worshipping idols. Dioscorus went into a rage, grabbed a sword and was on the point of striking her with it. The holy virgin fled from her father, and he rushed after her in pursuit. His way became blocked by a hill, which opened up and concealed the saint in a crevice. On the other side of the crevice was an entrance leading upwards. St Barbara managed then to conceal herself in a cave on the opposite slope of the hill.

After a long and fruitless search for his daughter, Dioscorus saw two shepherds on the hill. One of them showed him the cave where the saint had hidden. Dioscorus beat his daughter terribly, and then placed her under guard and tried to wear her down with hunger. Finally he handed her over to the prefect of the city, named Martianus. They beat St Barbara fiercely: they struck her with rawhide, and rubbed her wounds with a hair cloth to increase her pain. By night St Barbara prayed fervently to her Heavenly Bridegroom, and the Savior Himself appeared and healed her wounds. Then they subjected the saint to new, and even more frightful torments.

In the crowd where the martyr was tortured was the virtuous Christian woman Juliana, an inhabitant of Heliopolis. Her heart was filled with sympathy for the voluntary martyrdom of the beautiful and illustrious maiden. Juliana also wanted to suffer for Christ. She began to denounce the torturers in a loud voice, and they seized her.

Both martyrs were tortured for a long time. Their bodies were raked and wounded with hooks, and then they were led naked through the city amidst derision and jeers. Through the prayers of St Barbara the Lord sent an angel who covered the nakedness of the holy martyrs with a splendid robe. Then the steadfast confessors of Christ, Sts Barbara and Juliana, were beheaded. Dioscorus himself executed St Barbara. The wrath of God was not slow to punish both torturers, Martianus and Dioscorus. They were killed after being struck by lightning.

In the sixth century the relics of the holy Great Martyr Barbara were transferred to Constantinople. Six hundred years later, they were transferred to Kiev (July 11) by Barbara, the daughter of the Byzantine Emperor Alexius Comnenos, who married the Russian prince Michael Izyaslavich. They rest even now at Kiev's St Vladimir cathedral, where an Akathist to the saint is served each Tuesday.

Many pious Orthodox Christians are in the habit of chanting the Troparion of St Barbara each day, recalling the Savior's promise to her that those who remembered her and her sufferings would be preserved from a sudden, unexpected death, and would not depart this life without benefit of the Holy Mysteries of Christ.

Let us honor the holy martyr Barbara,
for as a bird she escaped the snares of the enemy,
and destroyed them through the help and defense of the Cross.

Singing the praises of the Trinity,
you followed God by enduring suffering;
you renounced the multitude of idols,
O holy martyr Barbara.
In your struggles, you were not frightened by the threats of your torturers, but cried out in a loud voice:
"I worship the Trinity in one God-head." 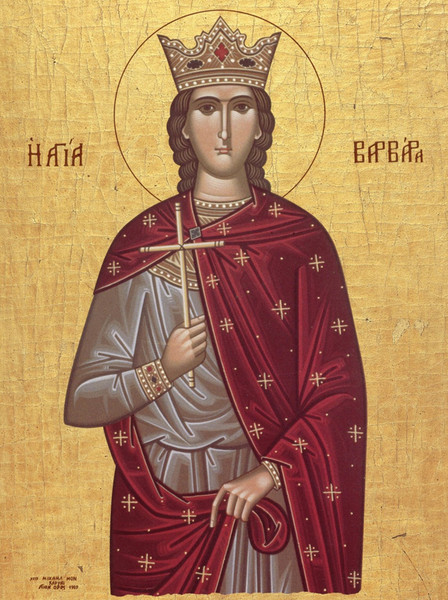 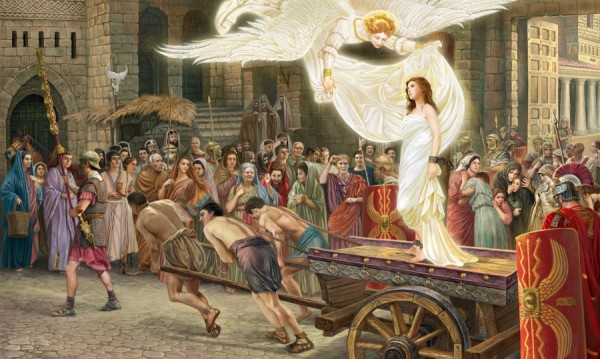