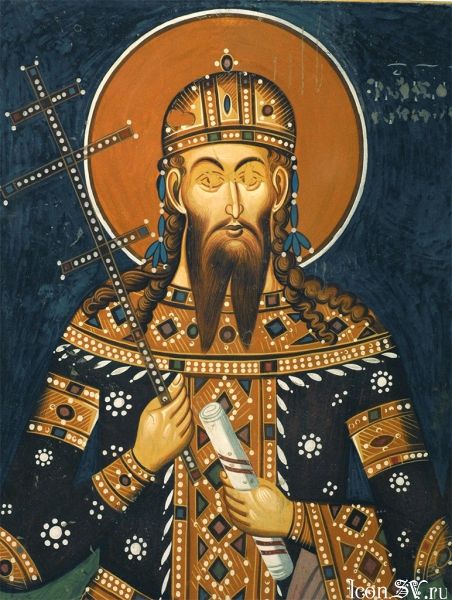 Saint Stephen Urosh, King of Serbia, was son of King Dushan Nemany, and was born in the year 1337. In 1346 he was crowned king. Dushan sought the daughter of the French king for his son, but the Roman Pope insisted that the princess not change from the Latin confession. Dushan did not want to see a Catholic in his family, and because of this St Stephen Urosh entered into marriage with the daughter of Vlad, Prince of Walachia.

Upon the death of his father (+ 1355), St Stephen Urosh became the independent and actual ruler of Serbia. He was faithful to the Lord, like a father he provided for widows and orphans, he pacified quarrels and maintained peace, he was charitable to the poor, and defended the downtrodden.

In the interests of peace in Serbia and indeed for the preservation of his own life, St Stephen was obliged to flee to his kinsman, Prince Lazar. St Stephen's uncle, Vulkashin, immediately seized the throne, but his fear of rivals gave him no peace. Through his sister, St Stephen's mother, he invited his nephew to come to the city of Skopje, on the pretext of a reconciliation. Greeting him with honor, as Tsar, he invited him to go hunting. When St Stephen, weary from the hunt, went off with his horse to a well and bent over to take a sip of water, Vulkashin struck him a mortal blow on the head with a mace.