The Holy Martyr Myrope was born in the city of Ephesus at the beginning of the third century. She lost her father at an early age, and her mother raised her in the Christian Faith. St Myrope frequently visited the grave of the Martyr Hermione (September 4), daughter of the holy Apostle Philip, took myrrh from her relics, and healed the sick with it.

During the persecution by Decius (249-251), Myrope went with her mother to the island of Chios, where they spent their time in fasting and prayer. Once, by order of the cruel governor of the island, the soldier Isidore (May 14), a man of deep faith and great piety, was martyred. St Myrope secretly removed the body of the martyr and buried it. The soldiers, who had been ordered not to allow the Christians to take Isidore's body, were sentenced to death.

St Myrope took pity on the condemned, and she told the soldiers and then the governor what she had done. At the trial she confessed herself a Christian. For this they gave her a fierce beating and then threw her in prison. At midnight, while she was praying, a light shone in the prison. St Isidore appeared surrounded by angels, and St Myrope surrendered her soul to God. The prison was immediately filled with a sweet fragrance. The pagan guard, trembling at the vision, told this to a priest. Later, he accepted Baptism and a martyric death for his confession of Christ. 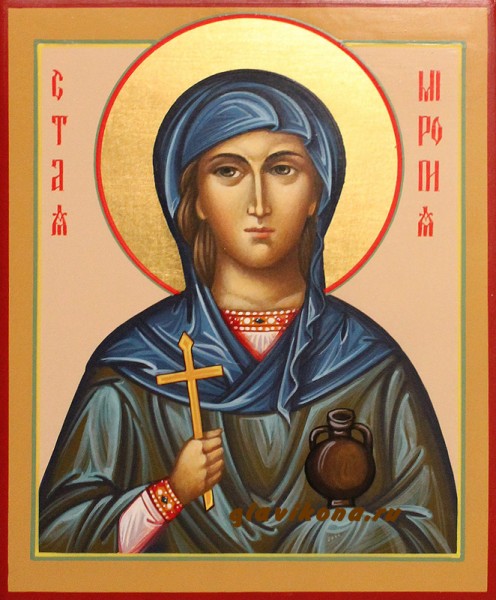