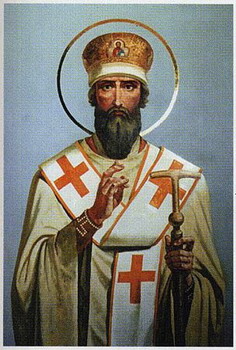 At first he was a presbyter and caretaker of church-vessels in the cathedral. He became Patriarch after the death of holy Patriarch Proclus (November 20). During this time, various disturbances and heresies threatened church unity.

In the year 448, St Flavian convened a local Council at Constantinople to examine the heresy of Eutyches, which admitted only one nature (the divine) in the Lord Jesus Christ. Persisting in his error, the heretic Eutyches was excommunicated from the Church and deprived of dignity, but Eutyches had a powerful patron in the person of Chrysathios, a eunuch close to the emperor.

Through intrigue Chrysathios brought Bishop Dioscorus of Alexandria over to the side of Eutyches, and obtained permission from the emperor to convene a church council at Ephesus, afterwards known as the "Robber Council."

Dioscorus presided at this council, gaining the acquittal of Eutyches and the condemnation of Patriarch Flavian by threats and force. St Flavian was fiercely beaten up during the sessions of this council by impudent monks led by a certain Barsumas.

Even the impious president of the Robber Council, the heretic Dioscorus, took part in these beatings. After this heavy chains were put upon St Flavian, and he was sentenced to banishment at Ephesus. The Lord, however, ended his further suffering, by sending him his death (+ August 449). The holy Empress Pulcheria withdrew from the imperial court. Soon the intrigues of Chrysathios were revealed. The emperor dismissed him, and restored his sister St Pulcheria. Through her efforts, the relics of holy Patriarch Flavian were reverently transferred from Ephesus to Constantinople.