Our Holy Father Gregory of Decapolis 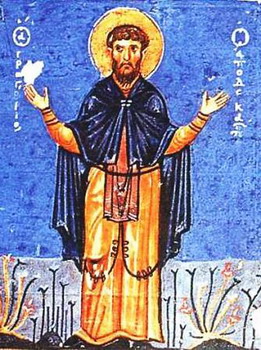 Saint Gregory the Decapolite was born in the Isaurian city of Decapolis (ten cities) in the eighth century. From his childhood he loved the temple of God and church services. He read the Holy Scripture constantly and with reverence.

In order to avoid the marriage which his parents had intended for him, he secretly left home. He spent all his life wandering: he was in Constantinople, Rome, Corinth, and he lived as an ascetic on Olympus for a while. St Gregory preached the Word of God everywhere, denouncing the Iconoclast heresy, strengthening the faith and fortitude of the Orthodox, whom the heretics in those times oppressed, tortured and imprisoned.

Through his ascetic effort and prayer, St Gregory attained the gifts of prophecy and wonderworking. After overcoming the passions and reaching the height of virtue, he was permitted to hear angelic singing in praise of the Holy Trinity. St Gregory left the monastery of St Menas near Thessalonica, where he had labored for a long time, and he went again to Constantinople in order to combat the Iconoclast heresy. At the capital, a grievous illness undermined his strength, and he departed to the Lord in the year 816.

St Gregory was buried at a monastery in Constantinople, and many miracles took place at his tomb. As a result, the monks removed the holy relics of St Gregory and enshrined them in the church where people could venerate them.

When Constantinople fell to the Turks in 1453, the relics of St Gregory were carried to the region of the Danube by a Turkish official. In 1498 Barbu Craiovescu, the Ban of the Romanian Land (Wallachia) heard of the miracles performed by the holy relics and bought them for a considerable sum of money. Barbu Craiovescu placed the relics in the main church of Bistritsa Monastery which he founded in Rimnicu Vilcea, where they remain to the present day.

A small book describing the miracles and healings performed by St Gregory the Decapolite in Romania has been written by Abbess Olga Gologan, who reposed in 1972.


Troparion - Tone 4
The twofold lamps of divine gifts,
Proclus, shepherd of New Rome, and Gregory, scion of Decapolis,
guide us by the light of grace as divinely-inspired fathers.
Let us draw near and eagerly beseech them,
that we may receive forgiveness and salvation of our souls.

Kontakion - Tone 3
The Church knows you to be a brilliant sun
enlightening all with the rays of healing and the beauty of virtue.
Therefore, as we celebrate your honored memory,
we glorify your struggles, ever-blest and all-wise father Gregory.