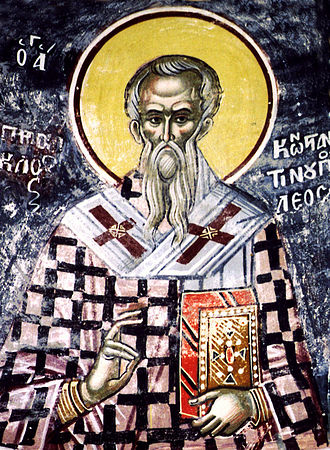 Saint Proclus, Archbishop of Constantinople, from his early years devoted all his time to prayer and the study of Holy Scripture. The Lord granted him the great good fortune to be a disciple of St John Chrysostom (November 13), who at first ordained him as a deacon, and then to the holy priesthood. He witnessed the appearance of the Apostle Paul to St John Chrysostom. St Proclus received from his teacher a profound understanding of Holy Scripture, and learned to elucidate his thoughts in a polished form.

After the exile and death of St John Chrysostom, the holy Patriarch of Constantinople Sisinius (426-427) consecrated St Proclus as bishop of the city of Kyzikos, but under the influence of Nestorian heretics he was expelled by his flock there.

St Proclus then returned to the capital and preached the Word of God in the churches of Constantinople, strengthening listeners in the Orthodox Faith and denouncing the impiety of the heretics. He once preached a sermon before Nestorius in which he fearlessly defended the title "Theotokos" in speaking of the holy Virgin. Upon the death of the Patriarch St Sisinius, St Proclus was chosen to take his place. Having thus been made Patriarch of Constantinople, he guided the Church over the course of twelve years (434-447). By the efforts of St Proclus, the relics of St John Chrysostom were transferred from Comana to Constantinople in the time of the holy emperor St Theodosius II (408-450).

When St Proclus was Patriarch, the Empire suffered destructive earthquakes, lasting for several months. At Bithynia, in the Hellespont, and in Phrygia cities were devastated, rivers disappeared from the face of the earth, and terrible flooding occurred in previously dry places. The people of Constantinople came out of the city with the patriarch and emperor at their head and offered prayers for an end to the unprecedented calamities.

During one prayer service, a boy from the crowd was snatched up into the air by an unseen force and carried up to such a height that he was no longer to be seen by human eyes. Then, whole and unharmed, the child was lowered to the ground and he reported that he heard and he saw the angels glorifying God singing: "Holy God, Holy Mighty, Holy Immortal." All the people began to sing this Trisagion Prayer, adding to it the refrain, "Have mercy on us!" Then the earthquakes stopped. The Orthodox Church sings still this prayer at divine services to this very day.

The Constantinople flock esteemed their Patriarch for his ascetic life, for his concern about the downtrodden, and for his preaching. Many works of the saint have survived to the present day. Best known are his discourses against the Nestorians, two tracts of the saint in praise of the Mother of God, and four tracts on the Nativity of Christ, setting forth the Orthodox teaching about the Incarnation of the Son of God. The activity of the holy patriarch in establishing decorum in all the church affairs gained him universal esteem. Surrounded by love and respect, St Proclus departed to the Lord after serving as Patriarch for twenty years.

The twofold lamps of divine gifts,
Proclus, shepherd of New Rome, and Gregory, scion of Decapolis,
guide us by the light of grace as divinely-inspired fathers.
Let us draw near and eagerly beseech them,
that we may receive forgiveness and salvation of our souls.

Today with the most revered of all cities
we fittingly celebrate your honored translation to heaven,
Father of Fathers, wise Proclus.