The Holy Martyrs Romanus and Barulas

The Holy Martyr Roman was deacon at a church in Palestinian Caesarea. During one of the persecutions against Christians he moved to Antioch, where he encouraged Christians in the faith by his example and fervent preaching.

When the Antiochian governor Asklepiades was considering the destruction of the Christian temple, St Roman called on the believers to stand up for their sanctuary. He persuaded them that if they managed to protect the church, then there would be rejoicing on earth in the Church Militant, and if they should perish in defense of the church, there would still be rejoicing in the heavenly Church Triumphant. Seeing such a firm resolve among the people, the governor did not dare to carry out his plans.

Some time afterwards, there was a pagan celebration in the city and many people came to Antioch from the surrounding area. St Roman began denouncing the idol-worship and called on all to follow Christ. They arrested him and subjected him to torture. During his torments the martyr saw a boy, a Christian named Barulas in the crowd. He directed the governor's attention to him saying, "This young man is wiser than you, though you are older than he, because he knows the True God. You, however, worship lifeless idols."

The governor Asklepiades gave orders to bring the boy to him. To all the questions of the governor, Barulas firmly and without fear confessed his faith in Christ, the True God. Asklepiades in a rage gave orders to whip Barulas, and then behead him. Before his death the holy child asked his mother, who was present at the execution, to give him something to drink. The mother called out to him to endure bravely to the end. She herself carried her son to the place of execution, and later buried him.

St Roman was sentenced to burned alive, but a heavy rain extinguished the fire. The saint began glorifying Christ and insulting the pagan gods. The governor commanded that his tongue be cut out, but even deprived of his tongue, St Roman loudly continued to glorify the Lord. Then the torturers placed a noose around his neck and choked him to death.

Your holy martyrs Plato and Roman, O Lord,
Through their sufferings have received incorruptible crowns from You, our God.
For having Your strength, they laid low their adversaries,
And shattered the powerless boldness of demons.
Through their intercessions, save our souls!

Your holy memory delights the universe,
Bringing us together to honor you in our joy.
We praise your great deeds with hymns, O Plato,
Crying out to you with faith:
O holy one, save our land from its enemies! 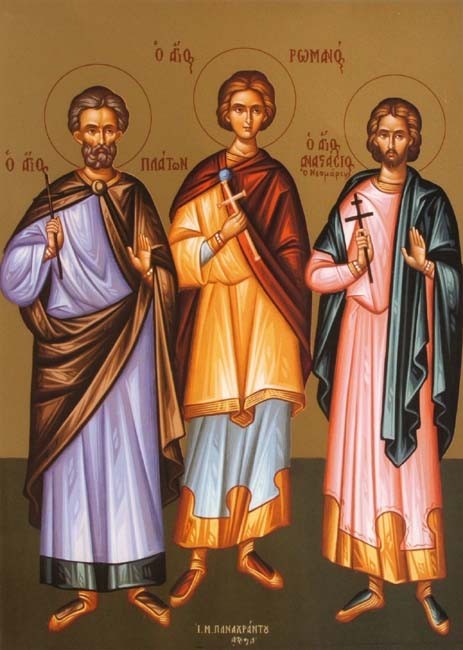