The Holy and Great Martyr Mercurius 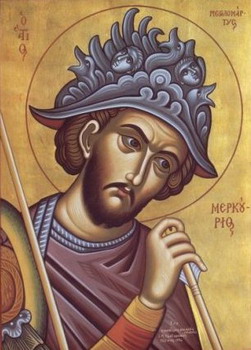 The Holy Martyr Mercurius of Smolensk was a Slav by birth, probably from Moravia, the descendant of a princely line. Brought up in Orthodoxy, St Mercurius in zeal for the true Faith left his own native land for Russia, where he served in the army of the Prince of Smolensk. The saintly soldier secretly led an ascetic life. He was strict in fasting, he was chaste, spending his nights at prayer, and spiritually preparing himself to suffer for Christ. In the year 1239 a horde of Tatars [Mongols], already having laid waste to many Russian cities, appeared in the vicinity of Smolensk and set up camp 25 versts away at Dolgomost, threatening to destroy the city and its holy places.

A church warden, praying by night in the Smolensk cathedral before a wonderworking icon of the Theotokos, heard the voice of the Queen of Heaven commanding him to find the holy warrior and say to him: "Mercurius, go forth into battle, for the Sovereign Lady summons you." The soldier went himself to the cathedral and heard the voice of the All-Pure Virgin, sending him to fight the enemy and promising him heavenly assistance.

The warrior of Christ set off that very night to the Tatar camp at Dolgomost. He fought there with the leader of the Tatar army, a giant possessed of immense strength. He killed him and entered into single-combat with the enemy host. Invoking the name of the Lord and of the All-Pure Theotokos, the holy warrior destroyed many of the enemy. The Tatar warriors watched with terror as lightning-bearing men and a radiant Woman aided St Mercurius in the fight. Unable to stand against the warrior of Christ, they retreated in flight. St Mercurius was himself killed in the battle by the son of the Tatar giant he had killed.

The inhabitants of Smolensk, saved through the miraculous intervention of the Lord and the Most Holy Theotokos, reverently buried the body of the soldier-martyr in the cathedral of the Dormition of the Most Holy Theotokos. Soon after his death, St Mercurius appeared in a vision to the church warden and ordered that his armor be hung over his grave, promising the Smolensk people constant help and intervention in every sorrow and struggle. Even today the sandals of the holy Martyr Mercurius are still preserved in the Smolensk cathedral church. His Feast was established at the end of the sixteenth century, and in 1509 the inhabitants of Smolensk were already calling him their special patron. 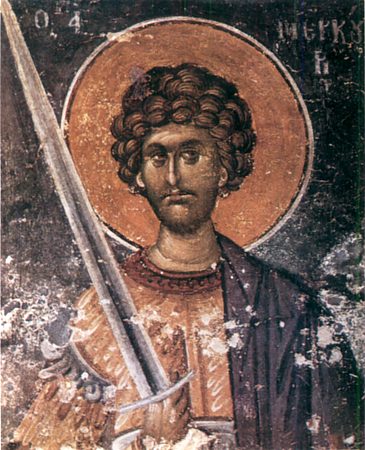 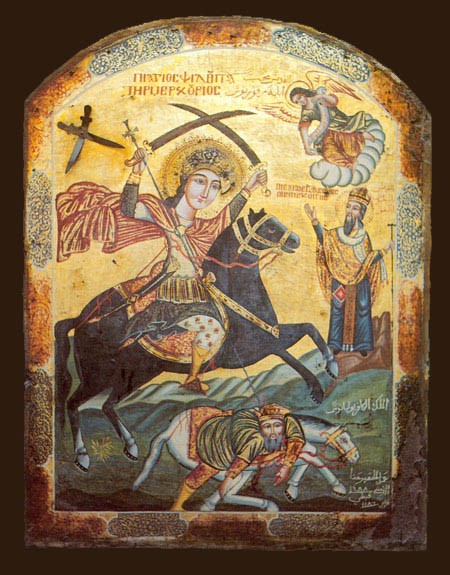