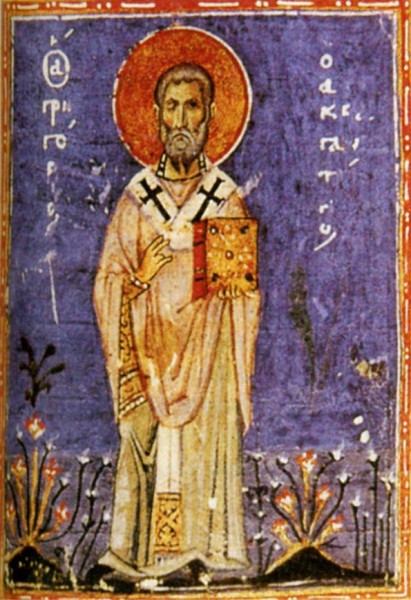 Saint Gregory, Bishop of Agrigentum, was born on the island of Sicily, in the village of Pretorium, not far from the city of Agrigentum, of the pious parents Chariton and Theodota. The infant Gregory was baptized by the bishop of Agrigentum, Pataimonus. At ten years of age the studious boy mastered writing and was able to read, and to sing church hymns. At twelve years of age St Gregory was given to the clergy, and he was put under the spiritual guidance of the archdeacon Donatus. St Gregory spent the next ten years in the Agrigentum church. Then, however, an angel of the Lord appeared to the holy youth, who had a fervent desire to visit Jerusalem, and said that God had blessed his intention.

At Jerusalem St Gregory was presented to Patriarch Macarius (563-574), who retained the pious youth for service in his own cathedral church, ordaining him deacon. The soul of St Gregory thirsted for monastic labors, and the Patriarch gave his blessing, allowing him go to a monastery on the Mount of Olives. After a year St Gregory departed this monastery for a desert Elder, who for four years taught him spiritual wisdom, humility and the principles of monastic life. The ascetic, foreseeing in St Gregory a future great luminary of the Church, gave him a blessing to forsake the solitary life.

Having left the Elder, St Gregory dwelt for a certain time at Jerusalem, and then went to Constantinople, where he was received with love by the brethren of the monastery of the holy Martyrs Sergius and Bacchus. The ascetic efforts of St Gregory were noticed by Patriarch Eutychius of Constantinople (552-565), at whose insistence the saint participated in the Fifth Ecumenical Council (553). At the completion of the Council St Gregory set off for Rome, to venerate the graves of the holy Apostles Peter and Paul.

During this time the bishop of Agrigentum died. The elder clergy and illustrious citizens of Agrigentum journeyed to Rome with a request for the Pope to determine a successor for their late hierarch from among a list of candidates they were presenting. The Pope, however, declined their proposal through divine inspiration, and instead summoned St Gregory to serve them as bishop.

For a few years St Gregory peacefully guided the flock entrusted to him by God. He was a defender of the down-trodden, a wise preacher, and miraculous healer. As archbishop, St Gregory led the life of an ascetic monk, fervently observing monastic vows. The flock loved their hierarch and trusted in him. But there were also malicious people who had resolved to slander him.

While St Gregory was in church, these vicious people secretly led a bribed harlot into his chambers, and then in front of the crowd which accompanied the bishop to the doors of his house after services, they led her out and accused St Gregory of the deadly sin of fornication. They placed the holy bishop under guard. The people attempted to defend their bishop, but were unsuccessful. At the trial the harlot gave false testimony against St Gregory. Just as she pronounced the words of slander, she went into a fit of frenzied rage. The judges accused the saint of sorcery. St Gregory was sent for judgment to the Roman bishop together with a report about his "crimes."

The Pope, after reading the charges, did not want to see the accused, and gave orders to remand him to prison. The saint endured his humiliation humbly, dwelling in constant prayer. His prayerful effort and wonderworking gifts quickly became known through the city and the surrounding region. Pious Romans began to gather at the prison, whom the imprisoned saint taught about the righteous life, and he implored the Lord to heal the sick.

After two years, a clairvoyant Elder named Mark, who had known St Gregory since youth, came to the Pope. The Elder did not believe the charges and he persuaded the Pope to convene a Council to decide Gregory's case. At the invitation of the Pope, many clergy from the city of Agrigentum came to the Council, together with all those making accusations against the saint, including the harlot. From Constantinople three bishops and the imperial dignitary Marcian came to Rome. Along the way Marcian had fallen grievously ill. On the advice of many people who had received healing through the prayers of St Gregory, servants carried the dying man to the prison where the wonderworking saint languished. Through the prayers of St Gregory the Lord granted healing to Marcian.

At the Council the slanderers attempted to renew their accusations, and as their chief proof they presented the deranged harlot to the judge, declaring that Gregory had bewitched her. But the saint prayed over her and cast out the devil. The woman came to her senses and told the Council the whole truth. The slanderers were brought to shame and judged. Marcian even wanted to execute them, but St Gregory implored forgiveness for them.

St Gregory returned in honor to his own cathedral, and surrounded by the love of his flock, he guided the Church until his own peaceful demise.

O God of our Fathers,
always always act with kindness towards us;
take not Your mercy from us,
but guide our lives in peace
through the prayers of the hierarchs Gregory and Amphilóchius.

Holy thunder, spiritual trumpet,
nurse of the faithful and axe striking down heresy,
hierarch Amphilóchius,
great and well-pleasing servant of the Trinity,
as you stand forever with the angels,
unceasingly pray for us all.