Our Holy Father Theodore the Studite 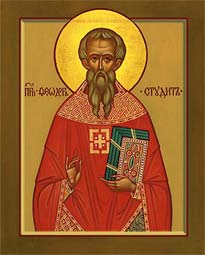 Saint Theodore the Confessor, Abbot of the Studion was born in the year 758 at Constantinople into a family of the imperial tax-collector Photinus and his spouse Theoctiste, both pious Christians. St Theodore received a good education from the best rhetoricians, philosophers and theologians in the capital city.

During this time the Iconoclast heresy had become widespread in the Byzantine Empire, and it was supported also by the impious emperor Constantine Kopronymos (741-775). The views of the emperor and his court conflicted with the religious beliefs of Photinus, who was a fervent adherent of Orthodoxy, and so he left government service. Later, St Theodore's parents, by mutual consent, gave away their substance to the poor, took their leave of each other and accepted monastic tonsure. Their son Theodore soon became widely known in the capital for his participation of the numerous disputes concerning icon-veneration.

St Theodore was accomplished in oratory, and had a command of the terminology and logic of the philosophers, so he frequently debated with the heretics. His knowledge of Holy Scripture and Christian dogma was so profound that no one could get the better of him.

Among the Fathers of the Council was St Platon (April 5), an uncle of St Theodore, and who for a long time had lived the ascetic life on Mount Olympos. An Elder filled with the grace of the Holy Spirit, St Platon, at the conclusion of the Council, summoned his nephew Theodore and his brothers Joseph and Euthymius to the monastic life in the wilderness.

After leaving Constantinople, they went to Sakkoudion, not far from Olympos. The solitude and the beauty of the place, and its difficulty of access, met with the approval of the Elder and his nephews, and they decided to remain here. The brothers built a church dedicated to St John the Theologian, and gradually the number of monks began to increase. A monastery was formed, and St Platon was the igumen.

St Theodore's life was truly ascetic. He toiled at heavy and dirty work. He strictly kept the fasts, and each day he confessed to his spiritual Father, the Elder Platon, revealing to him all his deeds and thoughts, carefully fulfilling all his counsels and instructions.

Theodore made time for daily spiritual reflection, baring his soul to God. Untroubled by any earthly concern, he offered Him mystic worship. St Theodore unfailingly read the Holy Scripture and works of the holy Fathers, especially the works of St Basil the Great, which were like food for his soul.

After several years of monastic life, St Theodore was ordained a priest according to the will of his spiritual Father. When St Platon went to his rest, the brethren unanimously chose St Theodore as Igumen of the monastery. Unable to oppose the wish of his confessor, St Theodore accepted the choice of the brethren, but imposed upon himself still greater deeds of asceticism. He taught the others by the example of his own virtuous life and also by fervent fatherly instruction.

When the emperor transgressed against the Church's canons, the events of outside life disturbed the tranquility in the monastic cells. St Theodore bravely distributed a letter to the other monasteries, in which he declared the emperor Constantine VI (780-797) excommunicated from the Church by his own actions for abusing the divine regulations concerning Christian marriage.

St Theodore and ten of his co-ascetics were sent into exile to the city of Thessalonica. But there also the accusing voice of the monk continued to speak out. Upon her return to the throne in 796, St Irene freed St Theodore and made him igumen of the Studion monastery (dedicated to St John the Baptist) in Constantinople, in which there were only twelve monks. The saint soon restored and enlarged the monastery, attracting about 1,000 monks who wished to have him as their spiritual guide.

St Theodore composed a Rule of monastic life, called the "Studite Rule" to govern the monastery. St Theodore also wrote many letters against the Iconoclasts. For his dogmatic works, and also for his Canons and Three-Ode Canons, St Theoctistus called St Theodore "a fiery teacher of the Church."

When Nicephorus seized the imperial throne, deposing the pious Empress Irene, he also violated Church regulations by restoring to the Church a previously excommunicated priest on his own authority. St Theodore again denounced the emperor. After torture, the monk was sent into exile once again, where he spent more than two years.

St Theodore was freed by the gentle and pious emperor Michael, who succeeded to the throne upon the death of Nicephoros and his son Staurikios in a war against barbarians. Their death had been predicted by St Theodore for a long while. In order to avert civil war, the emperor Michael abdicated the throne in favor of his military commander Leo the Armenian.

The new emperor proved to be an iconoclast. The hierarchs and teachers of the Church attempted to reason with the impious emperor, but in vain. Leo prohibited the veneration of holy icons and desecrated them. Grieved by such iniquity, St Theodore and the brethren made a religious procession around the monastery with icons raised high, singing of the troparion to the icon of the Savior Not-Made-by-Hands (August 16). The emperor angrily threatened the saint with death, but he continued to encourage believers in Orthodoxy. Then the emperor sentenced St Theodore and his disciple Nicholas to exile, at first in Illyria at the fortress of Metopa, and later in Anatolia at Bonias. But even from prison the confessor continued his struggle against heresy.

Tormented by the executioners which the emperor sent to Bonias, deprived almost of food and drink, covered over with sores and barely alive, Theodore and Nicholas endured everything with prayer and thanksgiving to God. At Smyrna, where they sent the martyrs from Bonias, St Theodore healed a military commander from a terrible illness. The man was a nephew of the emperor and of one mind with him. St Theodore told him to repent of his wicked deeds of Iconoclasm, and to embrace Orthodoxy. But the fellow later relapsed into heresy, and then died a horrible death.

Leo the Armenian was murdered by his own soldiers, and was replaced by the equally impious though tolerant emperor Michael II Traulos (the Stammerer). The new emperor freed all the Orthodox Fathers and confessors from prison, but he prohibited icon-veneration in the capital.

St Theodore did not want to return to Constantinople and so decided to settle in Bithynia on the promontory of Akrita, near the church of the holy Martyr Tryphon. In spite of serious illness, St Theodore celebrated Divine Liturgy daily and instructed the brethren. Foreseeing his end, the saint summoned the brethren and bade them to preserve Orthodoxy, to venerate the holy icons and observe the monastic rule. Then he ordered the brethren to take candles and sing the Canon for the Departure of the Soul From the Body. Just before singing the words "I will never forget Thy statutes, for by them have I lived," St Theodore fell asleep in the Lord, in the year 826. At the same hour St Hilarion of Dalmatia (June 6) saw a vision of a heavenly light during the singing and the voice was heard, "This is the soul of St Theodore, who suffered even unto blood for the holy icons, which now departs unto the Lord."

St Theodore worked many miracles during his life and after his death. Those invoking his name have been delivered from fires, and from the attacks of wild beasts, they have received healing, thanks to God and to St Theodore the Studite. On January 26 we celebrate the transfer of the relics of Theodore the Studite from Cherson to Constantinople in the year 845.

Those with stomach ailments entreat the help of St Theodore.

O champion of Orthodoxy, teacher of purity and of true worship,
The enlightener of the universe and the adornment of the hierarchs:
O all-wise Father Theodore, your teachings have gleamed with light upon all things.
Intercede before Christ our God to save our souls!

You girded yourself with every ascetic practice
To protect your angelic life,
With the grace of God you conquered,
Becoming like the angels.
Never cease to intercede with them, O Theodore, before Christ our God,
That He may have mercy on us all! 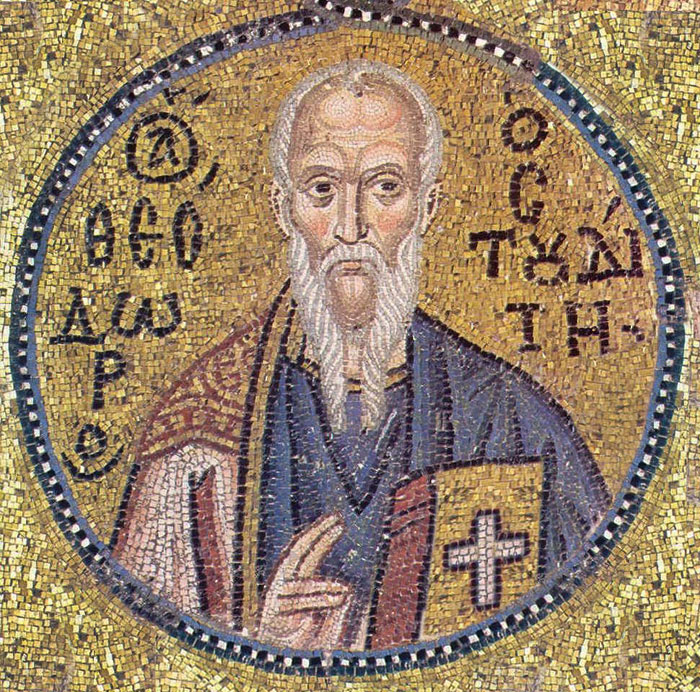