The Holy and Great Martyr Menas 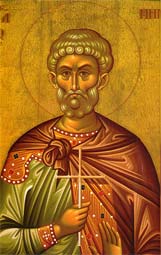 The Holy Great Martyr Menas of Egypt, an Egyptian by birth, was a military officer and served in the Kotyaeion region of Phrygia under the centurion Firmilian during the reign of the emperors Diocletian (284-305) and Maximian (305-311). When the emperors began the fiercest persecution against Christians in history, the saint refused to serve these persecutors. He removed his soldier's belt (a sign of military rank) and withdrew to a mountain, where he lived an ascetic life of fasting and prayer.

Once he happened to arrive in the city during a pagan festival. At the climax of the games the saint's accusing voice rang out, preaching faith in Christ, the Savior of the world. At his trial before the prefect Pyrrhus, the saint bravely confessed his faith, saying that he had come to denounce the impious. The prefect was angered, and had Menas arrested.

Pyrrhus offered to restore the saint's former rank if he would offer sacrifice to the pagan gods. When he refused, he was put to cruel tortures, then he was beheaded. This occurred in the year 304. Christians gathered up the martyr's relics by night and hid them until the end of the persecution. Later, they were brought to Egypt and placed in a church dedicated to St Menas southwest of Alexandria.

The saint received grace from God to work miracles, and to help those in need. St Menas is noted for healing various illnesses, delivering people from possession by demons, and as a protector, especially during times of war. We also ask his help in finding lost objects.

Your holy martyrs, O Lord,
Through their sufferings have received incorruptible crowns from You, our God.
For having Your strength, they laid low their adversaries,
And shattered the powerless boldness of demons.
Through their intercessions, save our souls!

Today the church honors those who fought the good fight and died for their faith:
The victorious Menas, the noble Victor and the ascetic Vincent.
The church glorifies their divine struggle and cries out with love:
Glory to You, O Christ, the lover of mankind. 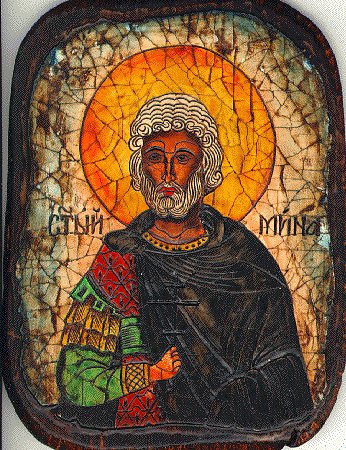