The Holy Martyr Vincent the Deacon 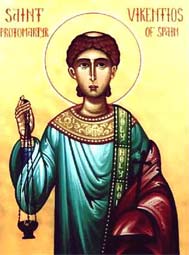 The Holy Martyr Vincent of Spain from his childhood was the disciple of a wise pastor Valerian, the bishop of the city of Augustopolis (now Saragossa, Spain). When he reached mature age, the virtuous, educated and eloquent Vincent was ordained deacon by Bishop Valerian. Since the bishop himself was not adept in speech, he gave a blessing to his deacon, an eloquent orator, to preach in church and among the people.

Diocletian (284-305) sent the governor Dacian to the city of Valencia, Spain with full authority to find and execute Christians. People denounced the wise bishop and his deacon to the governor, who arrested them. The soldiers, mounted on horses, dragged the Elder and his disciple behind them in chains from Augustopolis to Valencia, and there they cast them into prison beaten and tortured, giving them neither food nor water.

They subjected the bishop to the first interrogation. The Elder spoke quietly, but seemed tongue-tied and uncertain. Then St Vincent came forward and made the most eloquent speech of his life before the judges and assembled people. After he sent the bishop back to prison, the persecutor gave orders to torture the holy deacon.

The martyr underwent many torments: while nailed to a cross, he was whipped and burned with red-hot rods. When he was removed from the cross, he then himself joyfully climbed back upon it, saying that the executioners were lazy and had not fulfilled their master's orders. They became angry and tortured him again, until they were all exhausted.

After the tortures they threw the martyr back into prison. That night the astonished guard heard him singing Psalms, and saw an unearthly radiant light in the prison. The next morning the holy martyr was condemned to be burned on a gridiron. Christians took the saint's body and buried it with reverence. This occurred in the year 304.

Your holy martyrs, O Lord,
Through their sufferings have received incorruptible crowns from You, our God.
For having Your strength, they laid low their adversaries,
And shattered the powerless boldness of demons.
Through their intercessions, save our souls!

Today the church honors those who fought the good fight and died for their faith:
The victorious Menas, the noble Victor and the ascetic Vincent.
The church glorifies their divine struggle and cries out with love:
Glory to You, O Christ, the lover of mankind. 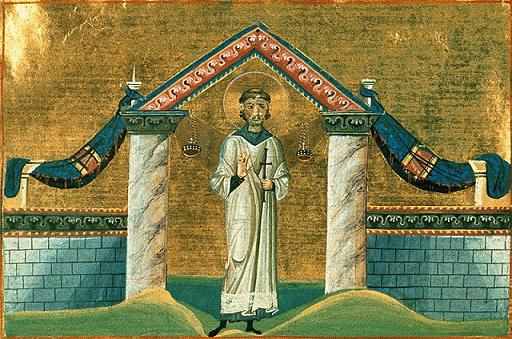