The Holy Martyr Stephen of Decani, King of Serbia 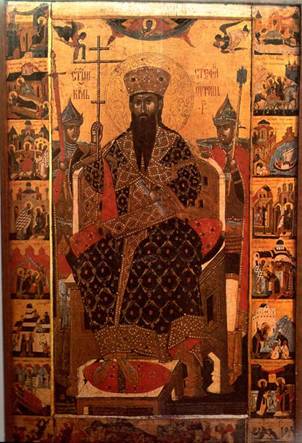 Saint Stephen was the son of King Milutin and the father of King Dushan. He was blinded on the orders of his father. St Nicholas (December 6) appeared to him in the church of Ovche Polje (Sheep Pasture) and said, "Do not be afraid.Your eyes have been given to me, and I shall return them to you at the appropriate time.

St Stephen lived in Constantinople for five years at the Monastery of the Pantocrator. He surpassed not only the monks, but also all the inhabitants of Constantinople, in his spiritual struggles, patience, and meekness. At the end of the five years, St Nicholas appeared to him again. Making the Sign of the Cross over his eyes, he restored Stephen's sight. In gratitude for this miracle, Stephen built the Dechani Monastery in Serbia.

In his old age, St Stephen was drowned by his son, receiving the crown of martyrdom in 1336.